What is Effective Length?

Effective length is a critical concept in Structural Design for all structural members such as Steel UC and UB sections, reinforced concrete columns and scaffold tubes.  Its technical definition is ‘the length of a component which is effectively restrained’.

When designing structural members they can be subject to a number of forces such as Shear, Tension, Compression, Torsion and combinations of these to name but a few.  Generally speaking, when we look at structural members, be it beams or struts, the Compressive force element is predominant in determining the structural capacity and the failure mechanism. 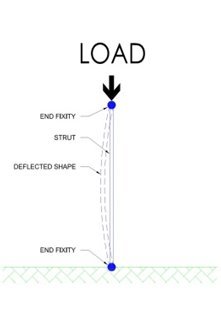 In this example, if the ends of the strut are held in place in all directions then the effective length Le is equal to the length of strut. 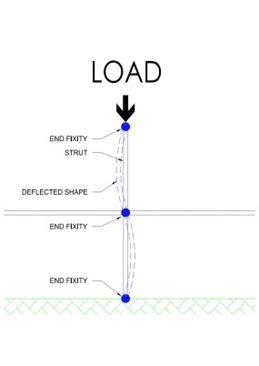 Now if we introduce a support in the middle and prevent it from moving in all directions, the Le becomes half the strut length.  This is critical, if we started for example with a scaffold tube of 2m it would have a strut capacity of 29.1 kN (TG20:08 Table 20).  By reducing the effective length to 1.0m the strut capacity increases to 58.6 kN. 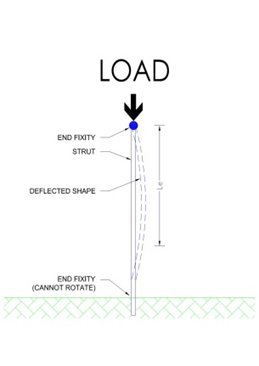 If we now fix one end of the tube in to concrete say so that it cannot pivot or rotate, although the length of the tube is still 2m, it now has an Le of 1.4m.  So our 2m tube in the last example can carry 45.3 kN – much more than a tube of the same length restrained as the first example.

For more explanation on this and other technical scaffold design subjects visit the IDH blog: http://www.idh-design.co.uk/blog/

What is scaffolding insurance, and do I need it?

Life Can be Electrifying

Hilti Impact Wrench: Guarantee will be void if used for scaffolding

The NASC release a taster of the forthcoming TG20:13 guidance