A prestigious Birmingham hotel has been reaching for the sky in search of the perfect safe access scaffolding solution.

Now, the Clayton Hotel in the city centre has a rooftop extension to be proud of having remained completely operational as works were carried out by CField Construction. None of this would have been possible, however, without the expertise of Sky Scaffolding Midlands Ltd who provided an interim solution for the two-storey scheme.

In order to maintain guest vistas and natural light pouring into the building, the scaffolders formulated a plan utilising Layher Allround towers installed between the existing windows of the lower floors. The towers were tied into the existing floor slabs and were bridged at high level to provide the first working lift at existing roof level.

As the contractor was unable to install any new permanent structure through the existing roofing membranes until the scaffolding structure was watertight, the experts at Sky began work from the project start date. In fact, the risk of water ingress into the operational hotel below would be too great once the waterproofing of the existing roof was broken.

Because there wasn’t a permanent structure to tie to above the existing roofing level, the scaffold had to extend a further 8m and support a 19m clear span temporary roofing structure. In terms of the original design, buttresses anchored to the existing roof slab were a possibility – alternatively, they could use tie beams between the two external elevation scaffolds.

After a lot of skilled planning, the company set about bracing and anchoring each frame of the scaffold back to the existing concrete roof slab. This involved using 4x band and plate fittings and concrete anchors per frame, drastically reducing the amount of material needed to support the scaffold. 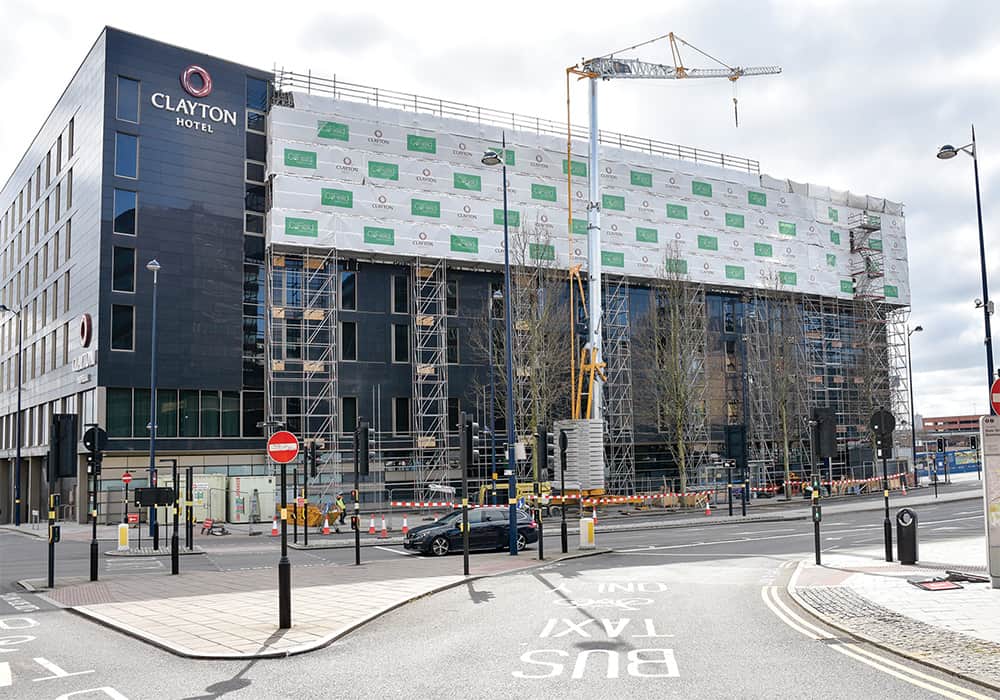 The result was a superb view from the road level as the scaffold appeared to be built four lifts above tie level without lateral support. Shrinkwrap was chosen as the best sheeting system for most of the temporary roof covering, due to the unusual shape of the roof at the interface with the existing higher-level part of the hotel.

The scaffolders elected to work alongside A HAKITEC roof system for the remaining section of the roof as the Contractor required the ability to pull sheets back and crane materials into the worksite. It all depended on the weather conditions of course.

It was then time to construct a full-height site staircase and two large crane loading bays on the Moor Street Queensway Elevation. The scaffolding was so strong fully sheeted it comfortably survived Storm Ciara and Storm Dennis in February 2020.

JP Burke, CField Construction Contracts Manager, explained: “Sky Scaffolding were appointed to execute access requirements and temporary roofing solutions for our Clayton Hotel project in Birmingham. CField decided a temporary roof was critical for the execution of the project as the existing building remained live throughout our construction period.

The temporary roof, supplied and installed by Sky Scaffolding, proved a perfect solution and was an impressive structure greatly admired by all. Sky Scaffolding provided fantastic site personnel with great experience, knowledge and care. Their attention to detail was excellent throughout their element of works. Many thanks to the Sky team for contributing to the success of this complex scheme.”

Thoroughly safe access was provided for the successful completion of the project last summer despite the pandemic.

Both CField and the hotel had certainly reached new heights as Sky Scaffolding elevated their already high reputation for quality and innovation to a whole new level.