Scaffmag has been looking at a new product just launched that its makers say is perfect for scaffolding over any fragile roof. Fully tested the ScaffPutLoad is ready to take the UK scaffolding industry by storm – Its inventor took the load off to tell us more.

Innovation as far as Scaffolding Products Limited are concerned comes in two parts – Scaffputload P for various forms of scaffolding – and B for specialist bridging work.

This ingenious problem-solving solution came about following a specific challenge faced on a project involving bridging beams over a fragile roof. The method chosen to support the end of the beams wasn’t robust enough to cope with the working load. So, what was the answer?

Inventor and AIM Scaffolding Owner and Director James Mulvaney takes up the story: “The answer in this case would be to scrape, drill, chisel or grind out the mortar bed and insert a mechanical plate resting on the brick bed. This would not only be load bearing which is critical but also ensure the scaffold would not pull away from the wall.

“A great many houses carrying all shapes of roofs, windows and conservatories need a special type of support either side to ensure strength and safety throughout the job. And of course, we live in an age when a lot of people have conservatories attached to the property. The positioning of the sun-room can cause access problems in a lot of cases, especially where properties are located in close proximity to each other.

“The system has been fully tested on a first job involving the rest room for the nurses and doctors at the East Surrey hospital. It was a three-sided building involving a u shaped all glass conservatory. It proved to be the perfect project in terms of bringing out the best of the product, and the staff could continue using the rest room while the work was being carried out. It was a great feeling knowing all our efforts had been worthwhile.”

In short, the ScaffPutLoad “P”allows putlog scaffolding to be heavy duty, allowing where possible to bridge load bearing scaffolding platforms between two walls. It’s made from quality steel carrying four feet of welding by certified experts. Where narrow scaffolds are needed the system will require only one set of standards and remain load bearing. What’s more, each installed ScaffPutLoad has a working load limit of 3100kg – ScaffPutLoad “B” weighs 4.5kg with ScaffPutLoad “P” coming in at 3.5kg. It’s also fully tested by industry professionals to British Standards BS1139 -2.2:2009+A1:2015 2020.

In terms of the East Surrey Hospital replacement windows were needed on three elevations, positioned above the medical staff restroom located in a conservatory. James explained: “The building company contracted to complete the work were prepared to close the rest room and access the windows by removing the PVC roof sheets and allowing the use of scaffold support towers and bridging scaffolding. 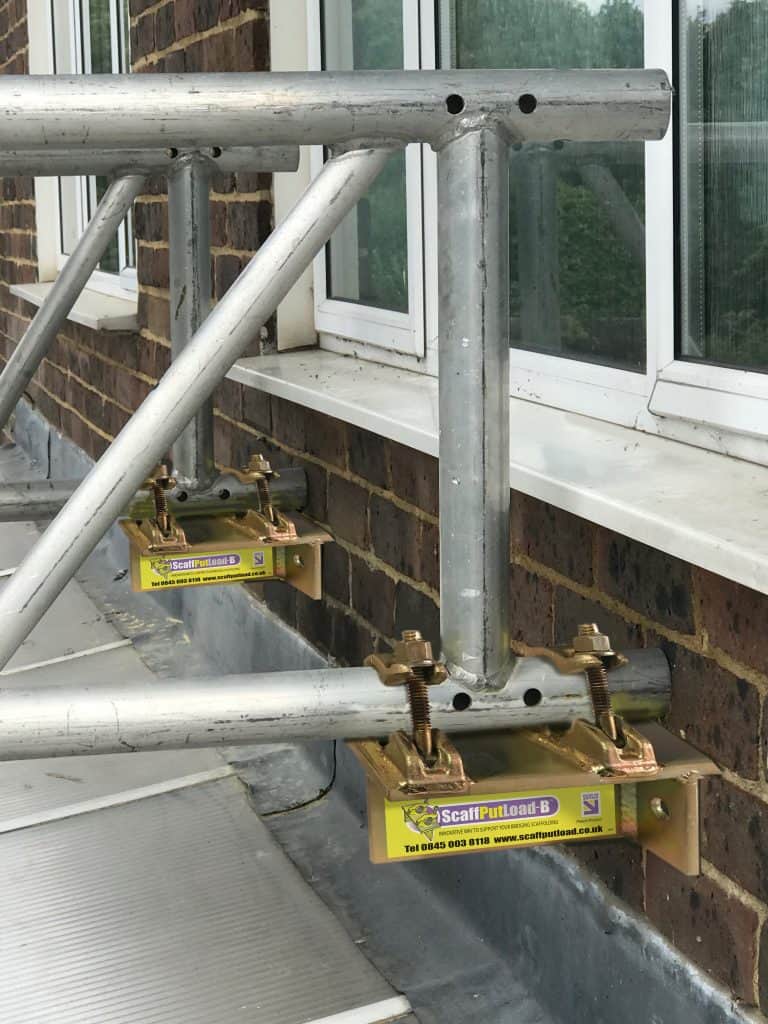 “The ScaffPutLoad eliminated the need to remove the PVC roof sheets, allowing total access to the windows and this meant the busy and much needed restroom could remain open for the duration of the project. It also eliminated any water ingress into the restroom.”

In fact, the product couldn’t have wished for a more challenging test as it prepares to hit the UK market. In fact, it also came up trumps at a residential property in Sussex where the requirements of the client involved access to the chimney to carry out remedial work. This was extremely vital as the property was in the process of being purchased.

The ScaffPutLoad eliminated the need for an end-to-end scaffold with bridging, offering a lower cost solution, in being able bride over a small area of the conservatory completing the required maintenance.

James has an impressive background in mechanical engineering, so it comes as no surprise to discover he was also previously responsible for bringing to market in 2013, the scaffcorroclamp, enabling scaffolders to lift and lower corrugated iron roofing sheets up to multi levels with ease. He’s financed the complete Scaffputload scheme himself and takes great pride in using his skills to help develop ideas aimed at solving everyday on-site problems.

He told us “It’s just nice to be able to contribute having had more than 30 years of experience across the industry I love so much. Scaffolders these days are much more professional in their approach and in many cases much better qualified. They know all about on-the-job problems, and of course if any scaffolding system isn’t right it can damage the property.

It’s really about approaching things logically and in a positive way. Modern demands are much greater so we need to do everything we can to be the best we can. I’m looking forward to seeing the response to Scaffputload, and of course it’s UK based and invented.”

For more information take a look at www.scaffputload.co.uk.

Altrad support the decommissioning of an offshore gas platform

Energy giant to stand trial over death of offshore scaffolder