With the recent success for the S.C.C.R for obtaining an extension of 12 months for the ECITB scaffolders registration scheme we take a look at who the S.C.C.R are. 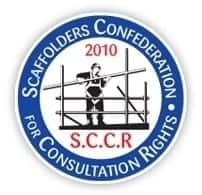 Scaffolders Confederation for Consultation Rights the S.C.C.R are a industry body formed by scaffolders for scaffolders in order to give a voice. The SCCR is a non profit making organisation run by scaffolders for scaffolders it has a democratically elected committee with yearly elections. The SCCR are constantly evolving, listening to the issues that concern scaffolders. The committee members are all currently working within the Scaffolding Industry with first hand experience, ranging from scaffolders on the tools to management. There aim for 2011 is to unite the Industry & get the skills back. Scaffolding is a skilled trade and the SCCR feels it needs to recognised for that.

The SCCR was formed by a group of regular contributors to a online forum for scaffolders as the forum evolved and the membership grew, a common theme began to appear. The major stake holder in the access industry the “scaffolder” had no cohesive voice within the various industry bodies. Members of this online forum decided to form a confederation to voice the working man as well as the small to medium companies. They felt important industry initiatives in training and health and safety were being implemented without any input from the scaffolders having to work in complacence with the initiatives.

The aim of the SCCR is to work with Industry bodies offering input and feedback on the latest ACOPs. One major issue which helped spark the formation of the SCCR was the planned withdraw of the ECITB scaffolders registration scheme at the end of 2010, without any contingencies in place to fast track ECITB scaffolders into the CISRS scheme at a level appropriate to the individuals skill and industry experience.

To date after representations to the UNITE union and the ECITB by the SCCR a meeting was held on the 7th 0f October 2010 , in attendance were representatives of the CISRS, ECITB, UNITE and the National Committee for Construction. Without the pressure from the SCCR  this meeting would never have taken place. It was agreed by all parties that the ECITB scaffolders registration scheme will now be extended until December 2011.

The SCCR have also arranged a meeting with the CISRS, at which the withdrawal of the ECITB scaffolders register will top the agenda for early 2011.

The SCCR also feels that the CISRS scheme needs an overhaul. The skills are being lost from the Industry, tickets being given out with little or no experience in the industry sectors. The SCCR feel scaffolding should be viewed as four sectors with training reflecting this.

Another issue of concern to the SCCR membership is the recent implementation of SG4:10, in particular the “scaff step” and the associated hazards arising from daily use, At a recent meeting with the HSE arranged by the SCCR concerns where raised and noted by the HSE also in attendance was a member of the NASC SG4: Working Party, it was agreed by all in attendance to monitor and review “scaff step” use at future planned meetings.

In a short space of time the SCCR has opened lines of communication to the HSE, NASC, CISRS, ECITB , CITB , and UNITE the union , as there membership continues to steadily grow the access industry policy makers are now starting to take the SCCR seriously and valuing the input from the SCCR committee & its members on issues that directly affect scaffolders .

They welcome individuals, companies & suppliers to the scaffolding Industry as members.

Check them out today and join the SCCR the “scaffolders voice”

Equality and Diversity at the TRAD Group

This week in Scaffolding: Seven posts you may of missed

Weekly round up 8 posts you may of missed