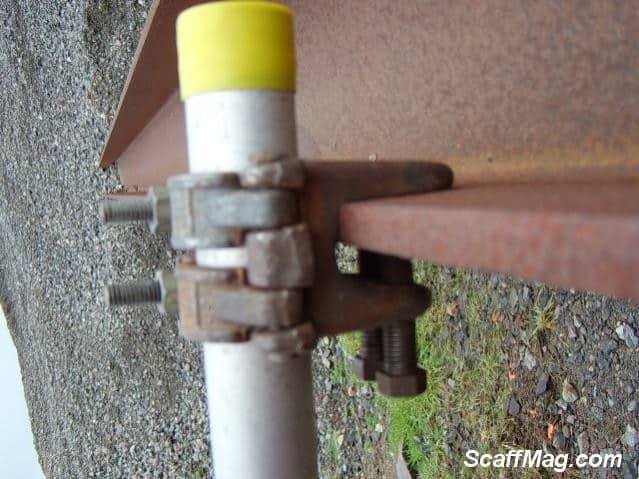 This old fitting is called the Under Deck 2000 it was developed by a offshore scaffolder called Ricky Morgan many years ago.

The fitting was designed to make building hangers with ease under platforms. You were able to build your goal posts and slide them out along the beam eliminating the use of buts and beam clamps. The fitting also doubled as your check fitting for your dropper.

The Under Deck 2000  has now been deemed obsolete due to when you tighten one bolt on the gate side the other bolt loosens due to the compression on the fitting (similar to what happens with a pressed sleeve) the same effect happens on the clamp side. some of the old school scaffs swear by them! every day is a school day!!!

As a side note: The Under Deck 2000 never really took off because of early mistakes Ricky Morgan made with the marketing of the fitting. The rumours are Ricky went straight to the top Oil & Gas bosses and tried to cut out the Scaffolding Service Companies. This in-turn pissed off the Service Companies and they gave the Under Deck 2000 bad press. Then to make matters worse the Oil & Gas bosses gave the fitting a big back heel.

Have you ever come across the Under Deck 2000 fitting ? Let us know in the comments below.

What is scaffolding insurance, and do I need it?

Life Can be Electrifying

Hilti Impact Wrench: Guarantee will be void if used for scaffolding

The NASC release a taster of the forthcoming TG20:13 guidance