Trad Group CEO becomes the new president of the NASC.

Over 160 NASC members, guests, confederation staff and members of the construction press that included ScaffMag, saw Des Moore become the new president of the NASC. The ceremony took place at a packed AGM held at the impressive Intercontinental London Park Lane Hotel on Friday 24 November 2017.

Des Moore takes the reins of the NASC presidency from the now ex-president Alan Lilley of the Hull based firm Commercial Scaffolding Ltd. In the new presidents welcoming speech Des thanked Alan for his two years of exceptional service, and also noted his contribution to growing the SME membership and mentoring smaller organisations to achieve compliance with the NASC criteria. 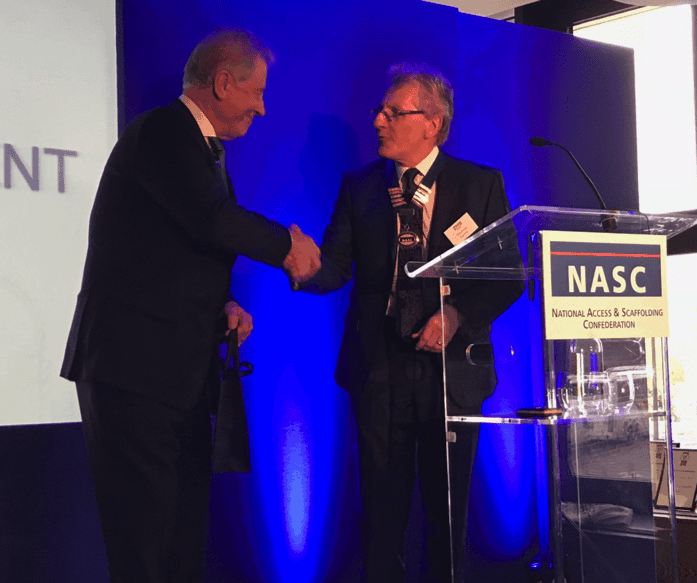 During his speech the new president set out his four key objectives he wishes to fulfil within his two year term.

Increase the pre-requisite for NASC membership by main contractors, developers, and national and local government agencies in tender documents.

Des discussed the importance of growing the NASC membership, as this would increase the positive influence which the confederation had over the industry, and assist with promoting and achieving core aims, the most important of which was a safer industry. Under this objective he also added that he intended to run a specific and targeted marketing campaign during his two year term as NASC president with a view to promoting the use of NASC members only for all projects, large and small.

Strike the right balance between the needs of both large and small companies.


Under this objective Des aims to meet the needs of both small and larger member companies, he noted that the voice of smaller companies should be heard and their contribution recognised, but also highlighted the importance of larger members to NASC membership should never be under-estimated.

Des stressed the importance of the NASC to the industry, he said the NASC was a true industry trade body with a rigorous audit process, and high standards for entry and retention of membership. He also aims to encourage and mentor more women into senior positions both in the NASC and across the industry in general.

Create mentoring and training schemes for all categories of staff, old and young. Academically gifted and those not so lucky.

The new president discussed this objective, outlining his own personal journey within the industry and noting that his lack of personal qualifications had not prevented him from progressing to the role of CEO of the TRAD Group of companies. He urged all at the AGM to encourage staff and operatives who had few or no academic qualifications to remain in the industry and pass on their knowledge and experience, and provide mentors to help them progress into support functions and management roles within their companies.

Des stressed the importance of encouraging more young people to enter the industry and represent their companies on NASC committees, noting that greater diversity brought with it new ideas, knowledge and fresh perspectives. This was vitally important given the current CITB re-structuring exercise and the recent decision to outsource all training courses by the latter part of next year.

Encourage and mentor more women into senior positions both in the NASC and across the industry in general.

In conclusion the new president commented on his objective to encourage more women to pursue careers in the scaffolding sector, and particularly to participate on the various NASC standing committees. He noted that at TRAD women had been encouraged and mentored and had gone on to excel in senior positions such as surveying and estimating, supervision and contracts management, and were now represented at board level.

Also speaking at the NASC AGM was special guest, Baroness Karren Brady CBE, the CEO of West Ham Football Club and star of the BBC hit show The Apprentice.

Karren outlined her own journey in the male-dominated world of football, stressing the importance of having a strong work ethic and determination. She discussed the challenges faced by organisations looking to attract skilled young people into their businesses and retain them.