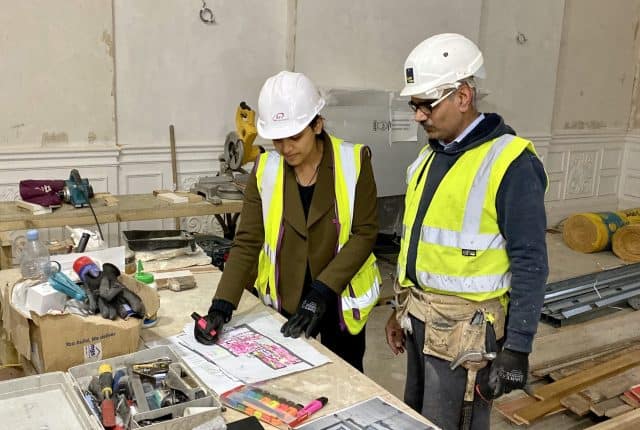 With 168,500 construction job opportunities being created by 2023, CITB has launched a new campaign to help change young people’s minds about construction.

The industry needs to change the hearts and minds of under-25s to address the skills shortage, as 71% of them are currently turned off by construction jobs according to CITB research.

So, Future Made is a new campaign to change their perceptions of construction – but if you’re reading this, you likely won’t see Future Made.

Instead, social media influencers will be posting content on their platforms to show young audiences their adventures in trying out bricklaying, roofing, painting and decorating and more as part of the campaign.

Day-in-the-life videos of inspirational young bricklayers, carpenters, painters and decorators will also be promoted to young people on their favourite social media.

Anjali Pindoria, 24, is a project surveyor with Avi Contracts and has submitted one such clip to the campaign. She said: “I absolutely love coming on site. Not only do I learn new carpentry and joinery elements but I also get to learn about construction in general, you get to see the different parts of the logistics and you just get to be inquisitive about what is going on on site.”

Billie-Jo Judd is a 22-year-old plasterer who also has made a Future Made video. She said: “It’s always something new, I just love it, it’s amazing, it’s probably the most therapeutic job in the whole world. The reaction from the customers is probably the best feeling ever.”

Watch Anjali and Billie-Jo, as well as Mimi-Isabella Nwosu, Verse Abudar, Lauren Holland and more on the Future Made content hub.

During a small-scale test phase last autumn posts received over 88,000 views in one month, with over 16,000 engagements. Content showing the positive experiences in the industry of their peers will attract young people, before being directed to detailed information on applying for apprenticeships and to local training providers on Go Construct.

Future Made is backed by the CITB Nation Councils for England, Scotland and Wales, made up of representatives from construction companies of a range of sizes and trades.

Diane Bourne, managing director with Eric Wright Civil Engineering, said: “Through my member seat on the CITB Nations Council for England, I am delighted to be involved in this campaign. My career has enabled me to support my passion for the profession of civil engineering together with a desire to help and nurture talented young individuals of the future and Future Made is both timely and necessary.

“The Eric Wright Learning Foundation, partnered with Preston’s College, is also a great example, delivering vocational training for 14+ year olds to support and guide them in choosing a career within the wider construction and civil engineering industry. We also have a great career ambassador programme within Eric Wright Group and I am looking forward to sharing my own passion with other members of the CITB Nations Council to encourage other young people into our industry.”

Perception changing takes time, so the Future Made campaign will take place throughout the next three years with annual results evaluated through surveys of young people’s attitudes to the industry.

Future Made is just one component of CITB’s construction careers strategy, which also includes:

CITB’s Construction Skills Network forecasts 168,500 new jobs being created in construction due to anticipated growth between 2019 and 2023.

Site workers to get 5% pay increase