Optimus Access Limited has launched a brand new ‘Your Well-Being’ Initiative, supported by the industry trade body the Scaffolding Association.

Over the past 3 months, the management team at Optimus Access Limited (OAL) along with representatives from trade organisation The Scaffolding Association, have been collaborating together with the single focus of creating a brand-new well-being framework, that will not only benefit just those at OAL but also the construction sector as a whole.

The “Your Well-Being” program is a simple framework that has been specifically designed to be able to help with the early detection of potential well-being issues in staff. While also providing a structure and set protocols for management to follow should a potential issue be identified.

“We wanted a system in place that gave us better tools to be able to help any of our staff who may encounter problems,” said OAL Health & Safety Director Michael Collier.

“But it was important to us, that whatever we designed, wasn’t to put an extra burden on the staff. In the past, predominantly well-being programs have just meant lots of box-ticking, nothing of any substance. We weren’t happy with that; our staff are our greatest asset, so we wanted to be proactive and ensure we had a better structure in place.”

Although the full details of the program cannot be released publicly to protect the confidential integrity of the program. The initiative is based on a simple traffic light system. With the differing levels triggering specific protocols. Some are a simple increase in monitoring, whereas others require seeking and referring professional help. 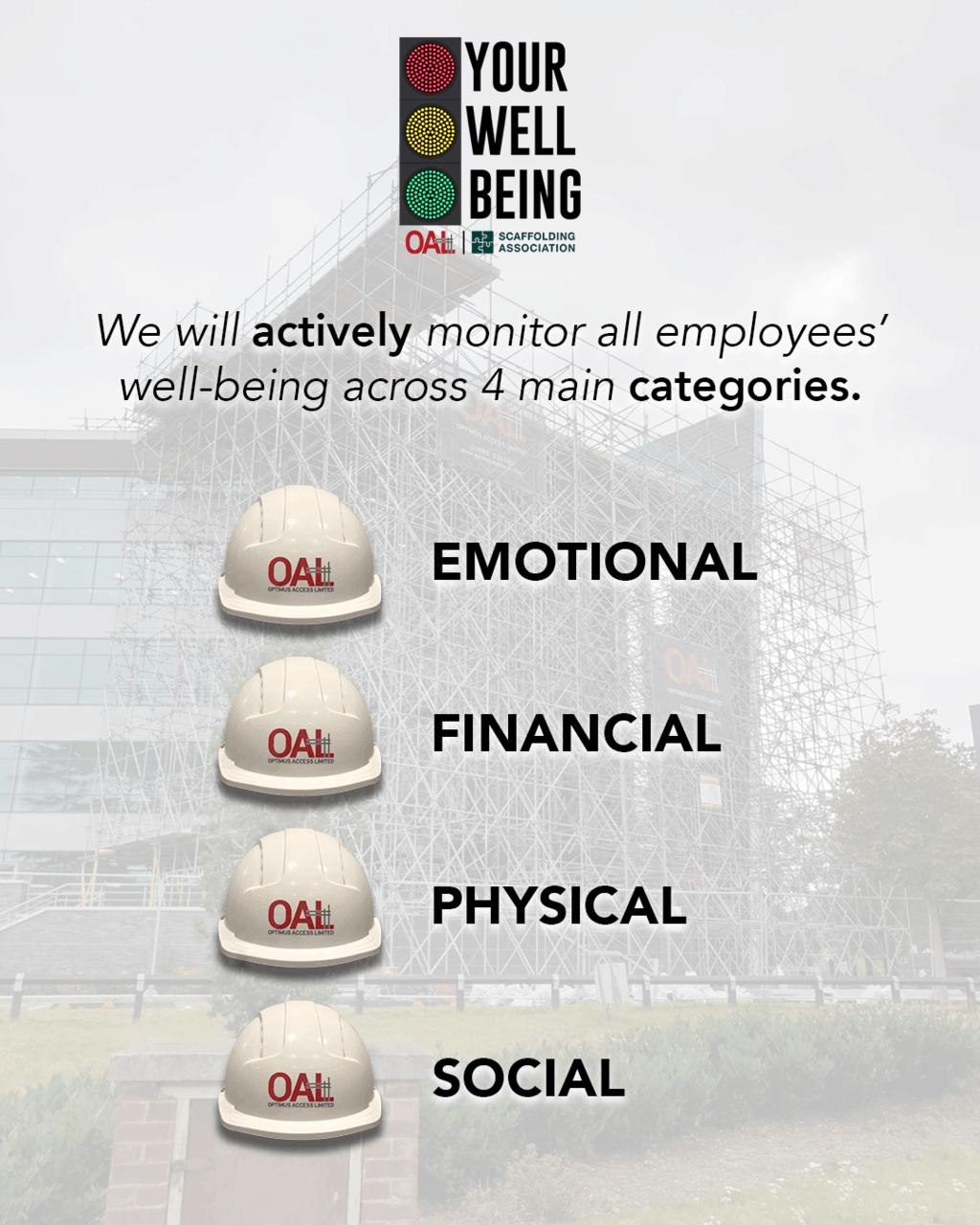 The framework allows the management team to react quickly if the need arises, rather than a problem arising then trying to figure out the best course of action. The program is designed to help identify potential issues across 4 main risk categories; Emotional, Physical, Financial & Social.

“Confidentially is obviously paramount, and we had to make sure that whatever we ended up with didn’t isolate anyone,” Said OAL Operations Director Todd Winter.

“Well-being is such a broad topic and all of us, at some stage have issues in our lives that would be deemed a potential well-being issue. Whether that be a loss of a relative, a breakdown of a relationship, ill-health or even addiction” explains Todd.

“Most of these problems sort themselves out with no need for extra support or intervention. But occasionally these issues can have bigger & lasting effects. The “Your Well-Being” program gives us the ability to proactively identify and support anyone who may need it. It will operate in such a way that each member of staff will be unaware of the level they are on, this is so there is no stigma attached to it. The last thing we want to do is drive any issues deeper,” said Todd.

Robert Candy Chief Executive of the Scaffolding Association went on to explain “Well-being issues, especially around Mental Health have had more column inches than ever before, but it’s a misconception that this is a new problem. There have always been these issues but as an industry, we are now better at recognising them than we have been in the past. One of the core problems is that intervention tends to be reactive, not proactive and that is what we wanted to set about changing with the team at Optimus.”

The benefit of the collaboration is it pooled the expertise of the staff from the two organisations. More people working together on the problem, the better the end result. “This was never just about us here at Optimus, that’s why we reached out to Robert & the Team,” said Michael.

“The Scaffolding Association is the biggest trade organisation in our industry, they deal with hundreds of scaffolding companies on a daily basis. So, it seemed logical to us to ask for their input. They would have encountered problems we hadn’t even thought about. Plus, we wanted to make sure it was designed in a way that could be useful for other companies.

Laying the foundations for other companies to adopt a similar program was one of the key objectives set at the outset. People may think we are mad to go to all this work then allow others to benefit from it. But some well-being matters are far more serious than the usual business rivalry,” exclaimed Todd.

“We are literally talking about people’s lives here; we have a framework now that could potentially save a person’s life. Why would we not share that? We are all scaffolders at the end of the day! Regardless of what name is on our truck.”

Of course, no system is ever 100% perfect and with the way of life as we know it changing at a faster rate now than ever before, it is important to keep the program under constant review.

Michael explained “The Scaffolding Association will play a key role going forward as they will likely see trends before we do. They have a bigger pool of data so generate more results. Having their brains to pick, increases the efficiency of the program in the future”

The Your Well-Being program also shows a commitment to increasing awareness around potential issues. As well as giving staff confidence that any issues will be treated confidentially & seriously.

Todd goes on to say “We all know what it is like, no one likes to talk when they are struggling. But if this initiative gives us the tools to identify just one person in need then it will all be worth it. But not only that if the launch of the Your Well-Being program gives one person who is struggling the confidence to reach out to us for help, then this will probably be the most important work we have ever done.”

Construction Suicide Rates on the Increase