Today (8 March) is International Women’s Day – and Victoria Boyle is doing her bit for gender equality after taking on the responsibility for running Legion Scaffolding’s Mercedes-Benz trucks.

Legion Scaffolding was established by Daniel Boyle in 2012 and provides commercial and construction scaffolding services, including complex engineering structures, to clients throughout Greater London, Essex and north Kent.

Victoria joined her brother in the Brentwood-based business five years ago and worked initially as his Personal Assistant before stepping up to become Company Secretary. Then, after a vacancy arose for a new Transport Manager, Victoria jumped at the opportunity to add another role to her CV.

“I told Daniel I really wanted to have a go at managing the fleet and he agreed to back me,” she recalled. “Although times are changing, it’s not a job in which you’ll find many women. But I’ve always worked in male-dominated environments – I’ve sold cars and was also a shift manager at DPD, for example – and it suits my character. I knew I could make a go of it.”

And so it’s proved. Victoria participated in an intensive two-week training course at Essex Driver Training in Battlesbridge last summer, at the end of which she passed an examination to secure her Transport Manager’s Certificate of Professional Competence (CPC) qualification from the Chartered Institute of Logistics and Transport (CILT).

Her commitment and determination to succeed strikes a chord with today’s global celebration of the social, economic, cultural and political achievements of women. “I love being a Transport Manager,” enthused Victoria.

“It has its frustrations like any job, particularly because it feels as though the rules and regulations around compliance are constantly changing. But we have a great team of drivers and our Mercedes-Benz trucks are fantastic.”

These are exciting times for Legion Scaffolding, which has remained busy throughout the pandemic. The company recently relocated to a new yard on the opposite side of Brentwood that has double the space of its former home and provides the perfect platform from which to achieve its growth ambitions.

Meanwhile, Legion Scaffolding has just taken delivery from local Dealer Motus Truck & Van, of three new Mercedes-Benz Actros 18-tonners. They represent something of a milestone in being the operator’s first brand new trucks – it has previously acquired used vehicles, including the Euro V Axor rigids that have now been stood down to make way for their successors. 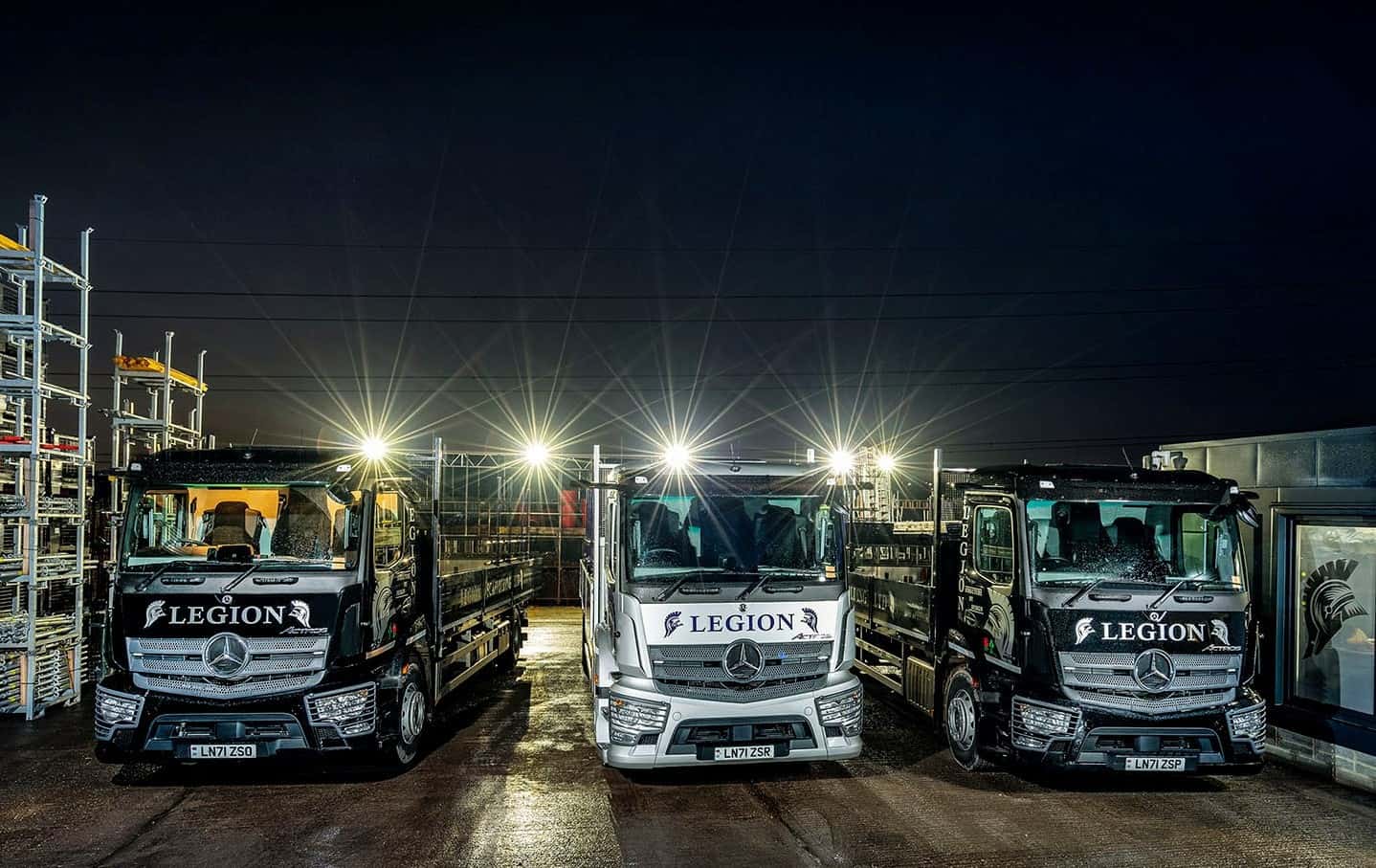 The subject of a Mercedes-Benz Finance contract hire agreement, the new arrivals are Actros 1824 variants with ClassicSpace S-cabs and 320mm engine tunnels. This combination, together with the enhanced visibility provided by their standard-fit MirrorCam technology, merits an impressive four-star Direct Vision rating from Transport for London.

The Actros are powered by 7.7-litre in-line six-cylinder engines that produce 175 kW (238 hp) and are fitted with bespoke platform bodies by Piggott Coachbuilders, of Bishop’s Stortford.

Motus Truck & Van Sales Executive Steve Jenkins worked closely with his customer to ensure the new trucks are perfectly specified to meet its requirements, so each is fitted with an additional centre seat, as well as an optionally upgraded radio and an air gun on a wander lead for blowing dust out of the cab, and protective grilles over the headlights.

Reflecting the operator’s commitment to safety, the trucks are additionally equipped with Brigade safety cameras that were installed by Advanced Alarms, an established supplier to the Dealer. 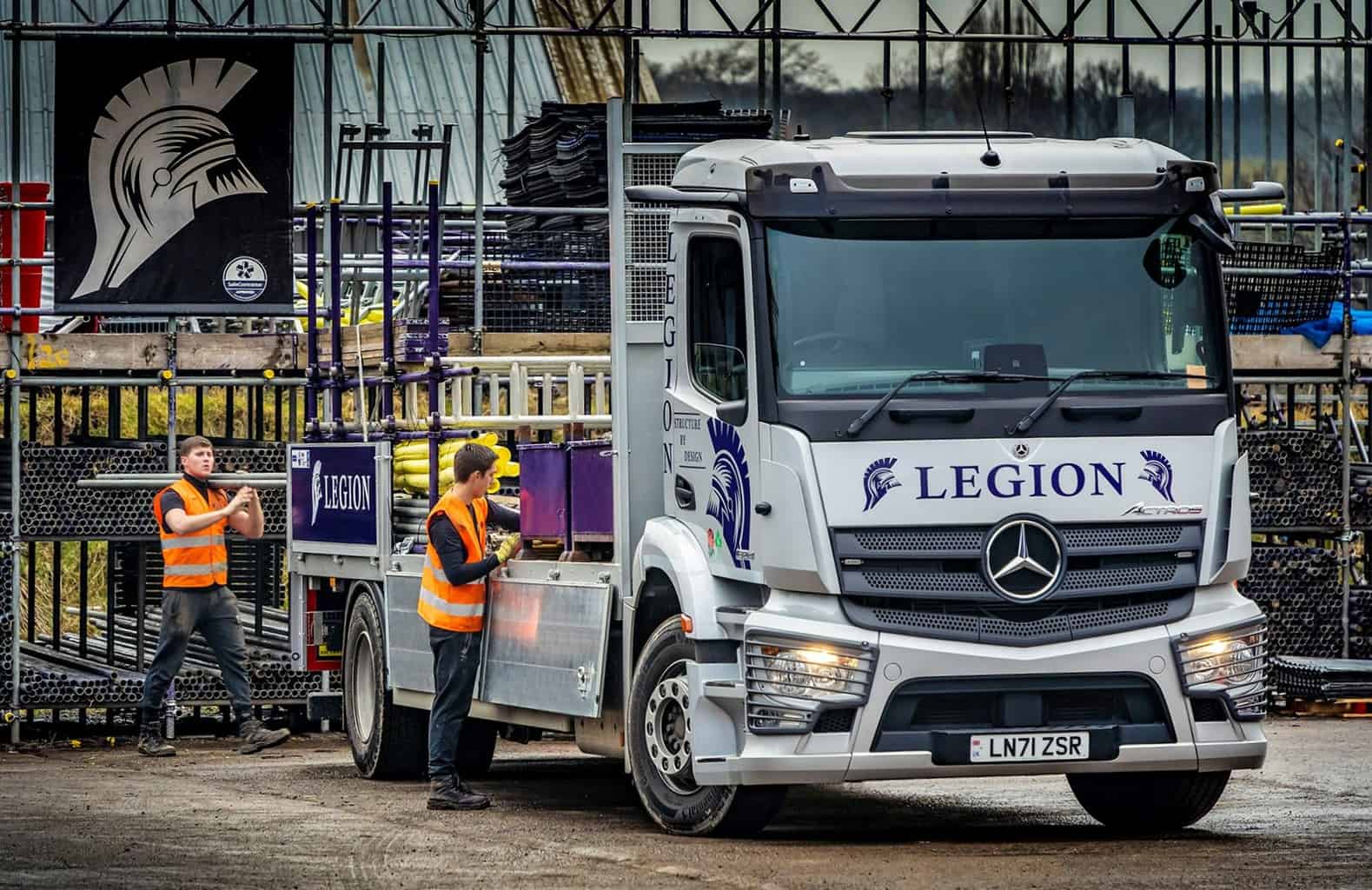 They are also the first vehicles to wear Legion Scaffolding’s smart new livery – two are in black but the other is silver, with highlights in the same purple shade as the company applies to its scaffolding tube. They have lined-up alongside its remaining pre-owned truck, a 4×2 Actros tractor unit first registered in 2015, which works with a pair of flat-bed trailers.

“Our Mercedes-Benz trucks have always been cost-effective to run and exceptionally reliable,” confirmed Victoria. “That’s crucial, not least because we do a lot of work for a client that undertakes emergency repairs to local authority housing stock, so when they call we have to be able to respond quickly.

“Image is also important in this business, and my brother likes everything to look smart and professional,” she added.

“Mercedes-Benz is a premium brand and our new trucks have already been very well received by customers. We believe the three-pointed star reflects the quality of our own service.” 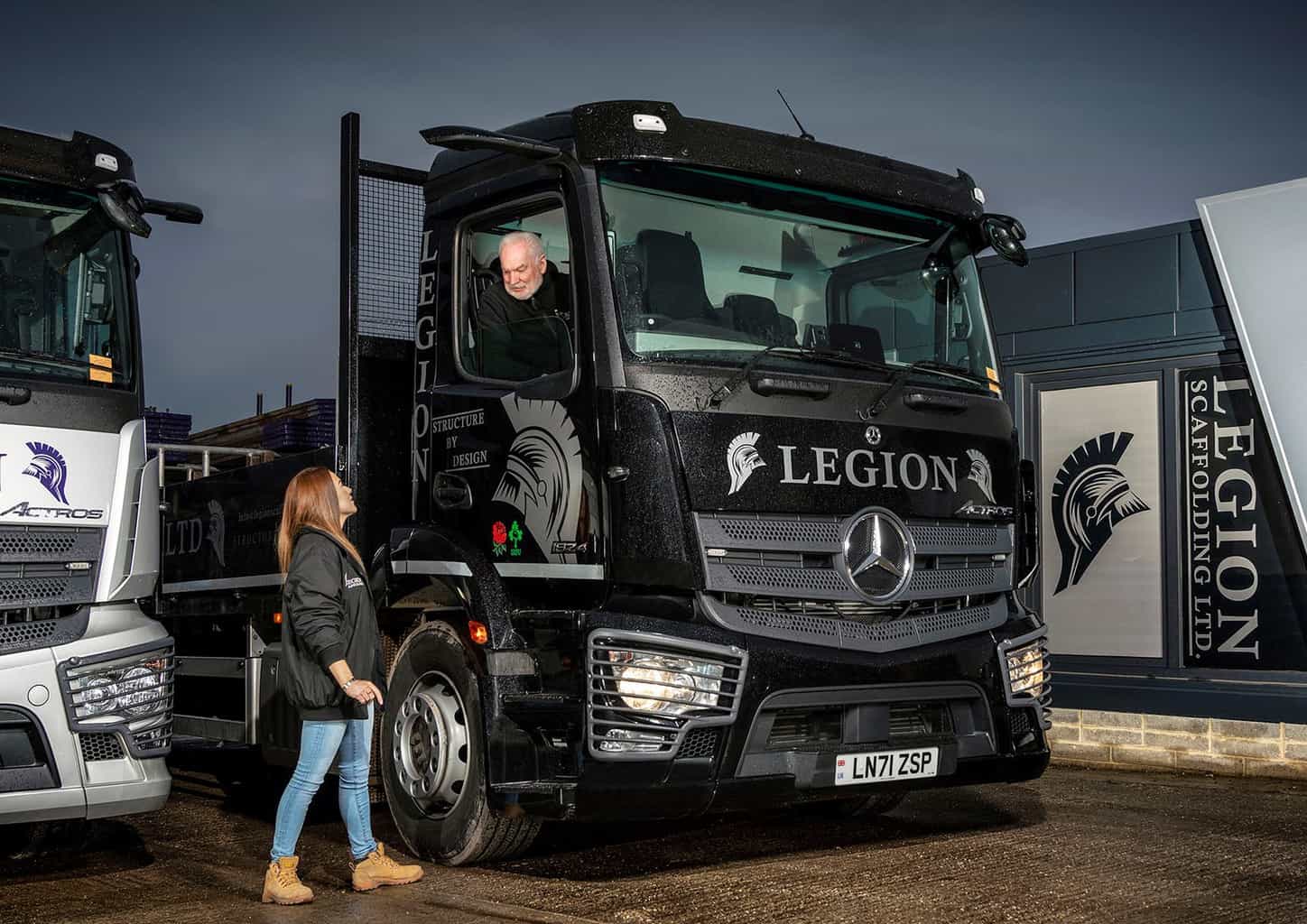 The theme for International Women’s Day 2022 is #BreakTheBias. Whether deliberate or unconscious, say those behind the campaign, bias makes it difficult for women to move ahead. Knowing that bias exists isn’t enough, they contend. Action is needed to level the playing field.

Mercedes-Benz Trucks UK Head of Marketing Katie Purcell commented: “We’re delighted to be recognising International Women’s Day 2022. Although there are more women working in our industry every year, there is still a long way to go before we achieve true parity.

“So it’s always great to be able to celebrate the achievements of women like Victoria, who are ‘breaking the bias’ by smashing stereotypes and proving that Mercedes-Benz trucks are for everyone, irrespective of their gender.”