A scaffolding firm and house builder have been prosecuted after two bricklayers were injured after falling from scaffolding that collapsed.

Cathedral Scaffold Company Ltd had erected a scaffold six meters from the ground bridging a narrow gap between the gable ends of neighbouring houses on a construction site in Lincoln. After loading out materials, two bricklayers were about to start work when the scaffold collapsed. The two men fell approximately two meters onto the lift below, both men sustaining serious injurers. 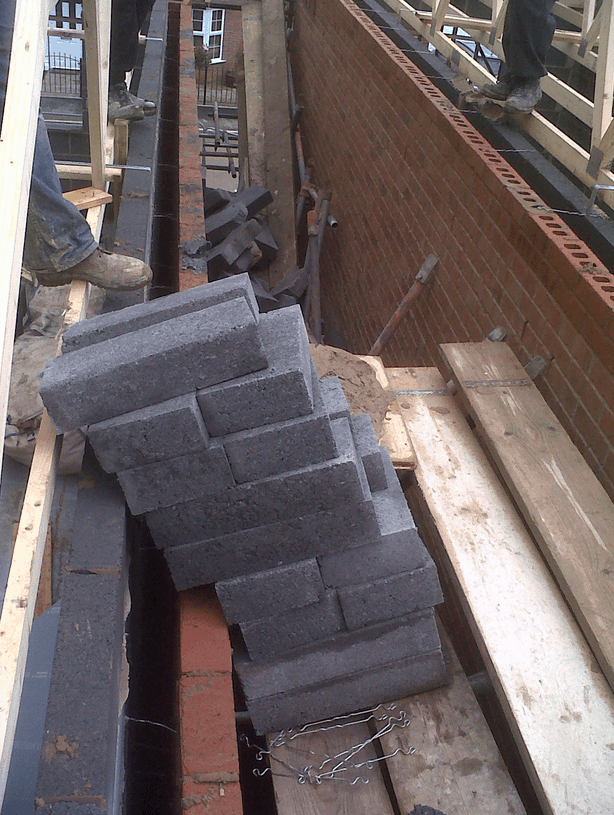 recognised design, which would of included standards to transfer the loads to the ground. Scaffolders onsite mistakenly believed they could not fit a four-board wide scaffold with standards required by the contractor Persimmon Homes Ltd in such a narrow gap.

Not to any current scaffolding standard the scaffold was still handed over to Persimmon Homes Ltd with a handing over certificate identifying the structure as a general purpose  scaffold capable of supporting a specified distributed weight load. As no calculations for strength or stability were undertaken this was not guaranteed.

Persimmon Homes Ltd then overloaded the scaffold causing it to collapse.

HSE found the weight of just one pack of dry blocks distributed evenly over the platform would have taken it over the load limit – even without the men, tools or mortar on the platform. It was likely that the actual loading could have increased the danger as the blocks were all stacked towards one side of the platform.

The Cathedral Scaffold Company Ltd, of Dixon Way, Lincoln, pleaded guilty to breaching Regulation 8(b)(ii) of the same Regulations and was fined £4,000 with costs of £5,500.

“Unless a scaffold is a basic configuration described in recognised guidance it should be designed by calculation, by a competent person, to ensure it will have adequate strength and suitability. The design information should describe the sequence and methods to be adopted when erecting, dismantling and altering the scaffold. That did not happen in this case.

“Persimmon accepted handover of the scaffold and subsequently overloaded it, causing it to collapse.”