Coal is used as fuel to produce superheated steam. This steam is run through turbines to produce electricity. Under normal operations, residue from coal impurities builds up within the interior surfaces, reducing the efficiency of the power plant. In order to correct this, the typical power plant often goes offline in order to be cleaned and maintained. Scaffolding needs to be built to access just about every internal surface. 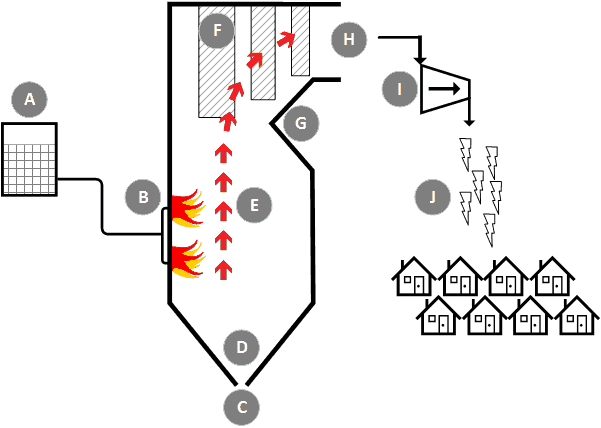 When a power plant goes offline it stops producing electricity and is a huge financial burden to the power company. To give you an idea of the cost of a power plant shutting down, consider that an average coal fired power plant can produce 600 megawatts per hour, or 600,000 kilowatt-hours. At  £0.11 per kwh, this equates to a £66,000 loss in revenue per hour, or about £1.6 million per day.

The complexity of building scaffolding to service a power plant presents unique challenges to a scaffolding company. Even an average-sized boiler requires a massive amount of scaffolding and, to make matters worse, power plants are often located at remote locations that can take days to ship materials to. If a project is delayed for 8 hours because of a few missing parts, the owner is at risk of losing £528,000. A “close enough” bill of materials can put you out of business.

By far the largest scaffold that needs to be built within a power plant is within the structure called the boiler. The boiler is where coal is ignited to produce superheated steam, which is in turn pushed out to the turbines to produce the electricity. Although boilers can be small, most of the boilers in power-generation are very large, requiring hundreds of people in varying shifts to build the scaffolding.

Boilers consists of four primary areas and shapes that every scaffolder needs to be aware of: the base, the main birdcage structure, the bullnose, and the superheater. Following will illustrate each area of the boiler scaffolding with automatically-generated models from Avontus’ Scaffold Designer software.

The base of every boiler is one of a few different shapes, often a V-bottom or a flat bottom that is sloped. Below the base is an ash hopper that collects the remains of the spent coal.

V-bottom boilers oftentimes have a set of beams extending across the opening with high-strength specialised ladders attached to the ends. Both the beams and the ladders are attached to u-heads and brackets and serve as the foundation for the main structure.

Flat bottom boilers are sloped to a single side where the ash hopper is located. Although less-specialised equipment is required, unique challenges are still present to properly brace the scaffolding from sliding down the slope.

The main body of the boiler is rectangular, oftentimes with chamfered corners. Burners are located throughout the boiler walls to ignite the coal and create a cyclone of heat that travels throughout. The walls in the boiler are made from high strength steel tubes that can handle large pressures from the superheated steam within them.

Near the top of the boiler the structure that cantilevers towards the centre is called the bullnose. As heat rises in the boiler, the bullnose serves to compress the air as it flows to the top. A scaffolding ‘dance floor’ (full deck) is typically installed here in order to access the underside of the bullnose as well as to collect falling debris when cleaning the boiler.

When water is heated to the boiling point it vaporizes and turns into saturated steam. This is similar to when you boil water on your stove and the steam contains quite a bit of liquid water. Although saturated steam is useful for heating applications, it is not very useful for power generation. In a power plant saturated steam is further heated to produce a phase change into what is called superheated steam. All traces of moisture are eliminated in superheated steam giving it a much lower density and higher efficiency to run through a turbine. The very top section of a boiler is called the superheater and is where this phase change happens. Groups of high-strength steel tubes, called pendants, hang down into the boiler at varying intervals to capture the heat.

More often than not only a single plank can fit in the tight spaces between pendants. When systems scaffolding bays can be built here they are used, but commonly side brackets or tube and clamp are clamped directly to the pendants.

Besides the logistics and accuracy issues mentioned earlier, hidden from view is an event that shocks both scaffolding companies and owners when it happens: structural failure. Surprisingly this happens quite frequently in boilers, and the most common causes are due to inadequate bracing, not enough ties, or overloaded legs. Although various systems scaffolding can sacrifice some bracing with additional ties, all manufacturers recommend bracing. A thorough structural analysis should be completed to determine the location and frequency of bracing as well as to determine if anything is overloaded.

For simple checks during the estimate phase the maximum leg loads can be calculated and validated against a safety factor.

Ultimately, a 3D wireframe model should be used in structural analysis software, such as SCIA Engineer®. Structural software analyses the scaffolding as a whole as well as of each load-bearing member and the type of moment connection between members.

Although software is very helpful for designing and estimating complex scaffolding structures, careful thought must be given to the safety and logistics of equipment and labour. Staging large quantities of scaffolding in strategic areas before construction starts can result in significant savings. There have also been advancements in lifts and hoists specifically for large scaffolds such as these.  Remember that most of the internal areas where scaffolding is built and used in a power plants are considered confined spaces; you are legally obligated to follow proper emergency procedures.

Brian Webb is the CEO and Founder of Avontus Software Corporation. Avontus specializes in software for the design, estimating, asset management and billing of scaffolding, shoring, and formwork.

Stay warm this winter with Makita

ITP has all needs covered for historic church restoration