Scaffolders have competed in the first-ever international scaffolding championships held at RESTA the countries largest trade fair in Vilnius, Lithuania.

In a bid to promote a professional scaffolding trade, while showcasing the improved safety standards within the Baltic region, nine teams from some of the leading scaffolding contractors within Lithuania, Poland, Estonia and Russia took part in the unique competition.

The international event was organised by the recently established Baltic Scaffolding Association (BSA). The BSA is a not-for-profit organisation that unites scaffold production, hire and sales companies and scaffold contractors in Northern Europe. The fundamental aim of the BSA is to promote the safe use of scaffolding and provide qualified training for scaffold installers in the region.

It’s not surprising to learn that many workers in Lithuania and its bordering countries are killed while working at height. The BSA is taking the first steps to tackle the terrible statistics by working closely with the Lithuanian State Labour Inspectorate to help improve their situation.

“We as an association think that scaffolders must get proper training before beginning to work. To show and prove that scaffolding can be completed efficiently and safely we decided to organise the International Scaffolding Championships,” said Žaneta Baltreniene Head of Training at the BSA. 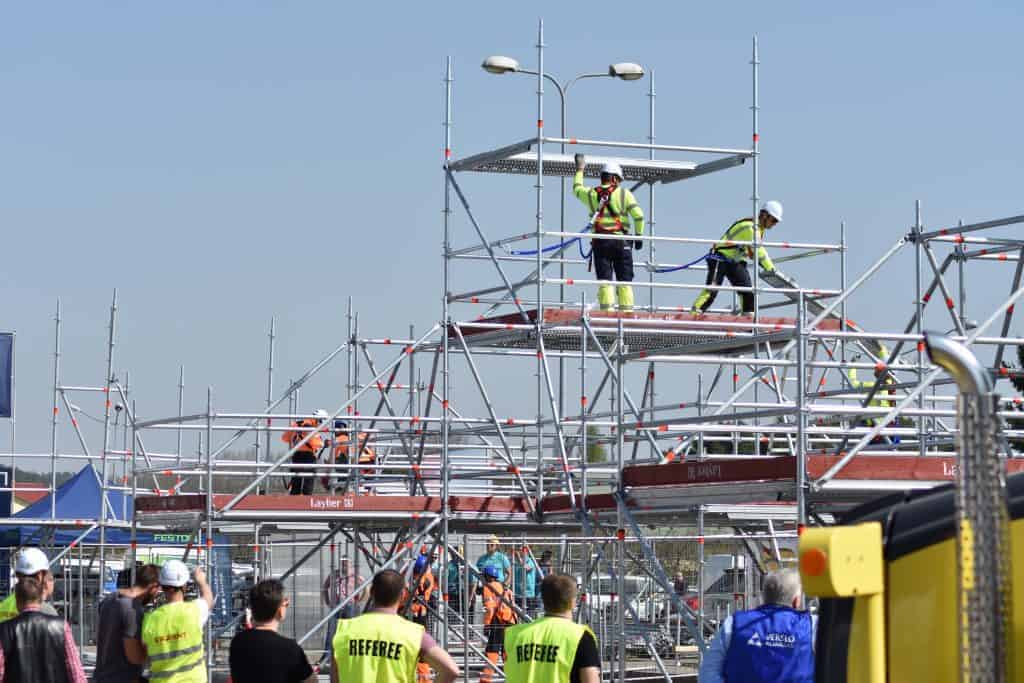 Nine teams of five scaffolders had to safely erect and dismantle a designed freestanding system scaffold within two hours. Each competing team was against the clock and under the scrutiny of industry expert referees who would impose time penalties for any safety breaches or construction inaccuracies.

Skilled scaffolders from the international firm HOTrema headquartered in Lithuania was awarded the 1st place accolade. Established in 2012 the company has many projects in a number of Europen countries. Judges and referees deemed the team’s safe erection and dismantling procedure was the fastest on the day.

Estonia based company Adelante Tellingud were placed 2nd while ARAD from Poland was awarded a 3rd place position.

Speaking after the event Žaneta Baltreniene said: “The championships was a big challenge, to have nine teams from five different neighbouring countries and to make everything run smoothly was not easy. We are proud to host such event for the first time in Baltic states.”

Event organisers hope to make the Scaffolding Championships an annual competition with the invitation open to more countries next year.