Gordon Vandrill has overcome a major car crash and the loss of a leg in a long journey taking him back to work as a scaffolder on some major projects. Scaffmag has been looking at his incredible story and how it can inspire others.

Gordon Vandrill is proof positive all human beings can achieve things regardless of any physical setback. Just imagine being trapped inside a crashed car for 90 minutes eventually having to be cut free by the fire brigade. Picture the medics realising the injury you have could be quite serious as they rush you off to hospital.

Just think about those hospital doctors discovering the full extent of your bodily damage before you’re rushed to theatre. In the case of this amazing scaffolder, surgeons battled through the night to save his life, when all seemed lost.

In fact, Gordon was left in a coma for two months enduring many more procedures. He’d lost a leg and was facing his biggest ever challenge. Two gruelling years of physiotherapy was to follow, but a fantastic will to overcome his problems coupled with a determination to get the most out of life began to win the day.

He takes up the story: “The most challenging aspect of being a scaffolder with one leg is if a lot of gear has to be walked a long distance, even though I wouldn’t like to show it, this would be very challenging for my leg and I get tired quicker being an amputee as I have to use more energy.  I still scaffold in all aspects of the role, including beam work, setting out, managing, traversing, and completing all my training.

“When I completed my Advance Training at Bircham Newton in 2018 I was led to believe I was the only amputee to have completed the course and asked for no special treatment.”

Naturally, Gordon wanted to get back to work as soon as possible. Far from simply preparing for what might lay ahead, he thought a nice little trip on a mountaineering expedition in the Atlas Mountains of Morocco would be just the job. A lover of mountaineering he’d need all his previous experience to get the most out of this demanding adventure.

Base camp for the Atlas Mountains is 3,200m above sea level, far higher than Gordon had climbed before. After a successful training day, the first challenge was Jebel Ouanakrim at 4,088m followed by the highest peak in the mountain range, North Africa’s largest, at 4,167m above sea level. This was what Gordon signed up or, but in the morning of the climb he didn’t feel too optimistic: He told me: “I was aching and feeling sick, I really didn’t think I could make it, but I went for it.”

Through Pain and long after his body wanted to give up, Gordon finally saw the summit!

When Gordon, who’s been in the industry for more than 20 years starts a new job, the people employing him usually have little idea he has a prosthetic leg. If the question arises, does he have a firm way of dealing with it? 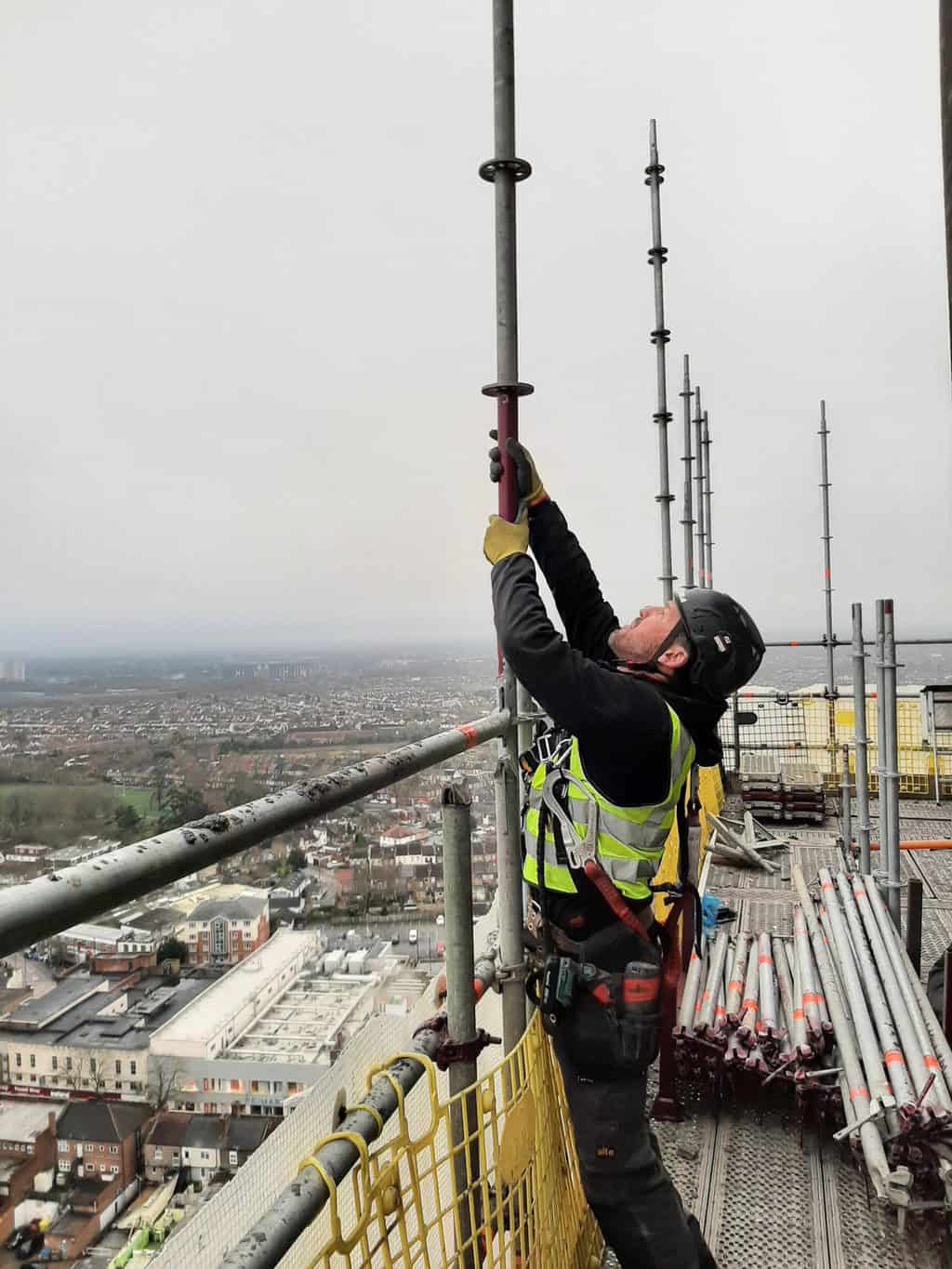 Gordon explained: “People are Shocked to start with as they usually don’t have any idea, this also applies to work with new companies.  I don’t wish to be judged any differently on my performance, so I chose not to highlight this to start with for fear of being wrongly judged in terms of mobility.

“When I do tell people, site manager or colleagues, they are met with disbelieve and surprise, followed by positive comments on my scaffolding ability and work ethic, which I pride myself on.

“I get up, do a good days work, be confident in my work, and hopefully have a few laughs along the way.

“When it comes to having one leg The summers are the worst, as the hot weather is uncomfortable on my prosthetic held on with a rubber lining.  The heat makes my skin sweat through lack of air, and wearing work trousers, this throughout the day becomes difficult as my stump becomes hot, swells and can blister.

“Over the years I’ve learnt to manage the best I can by going to the toilet to remove my prosthetic and dry my leg, which relieves the heat and the sweat. blisters, would make my day extremely hard and painful. 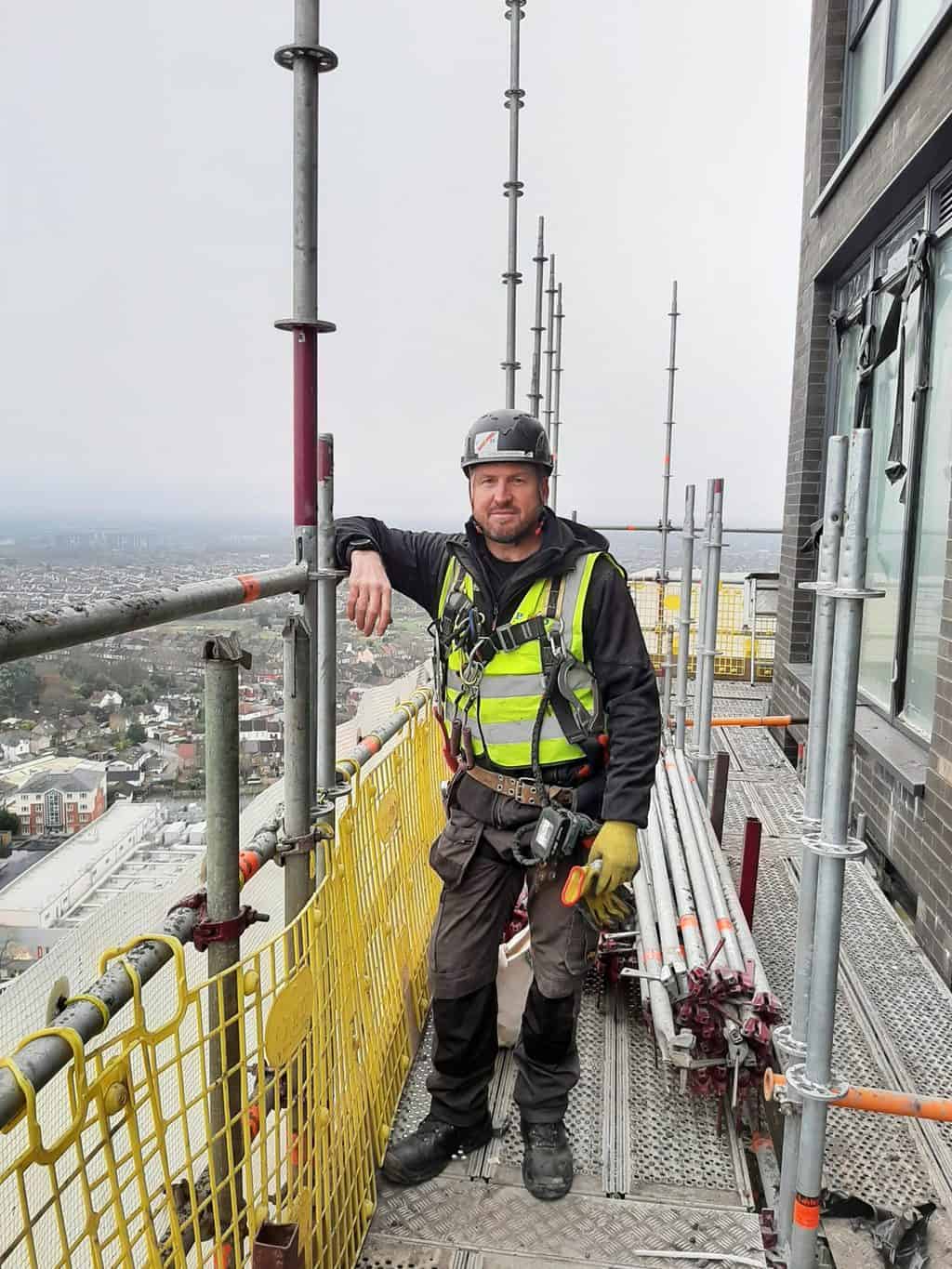 So, what advice does this charismatic young man have for anyone facing any sort of physical setback?

“It was a state of mind to get myself back and go back into scaffolding and do my job well.

“My mental state of mind is to get up every-day and go to work.  I won’t let my leg be a psychological barrier. I push myself harder and pride myself I can hold my own with able bodied scaffolders (if not better).”

Speaking with his employer, PHD Managing Director, Danny Dwyer said: “Gordon is a fantastic role model to those that work with him as he is incredibly focused and determined.

There is nothing that he can’t do. We are so proud of him as part of the PHD Access team and as a great example of overcoming adversity.”