A Wigan scaffolder has been sentenced after scaffolding collapsed at a retail site in Loggerheads, Staffordshire

North Staffordshire Justice Centre heard how Mr Kinsley a scaffolder had been subcontracted to erect a scaffold, with debris netting attached along its full length, for roofing work on a Co-Op retail store.

Mr Kinsley erected the scaffold with two of his employees, on 19 November 2015 but did not design the scaffold correctly or ensure it was tied to the building in any way.

On 5 December 2015 the scaffold collapsed into a car park at the side of the store. 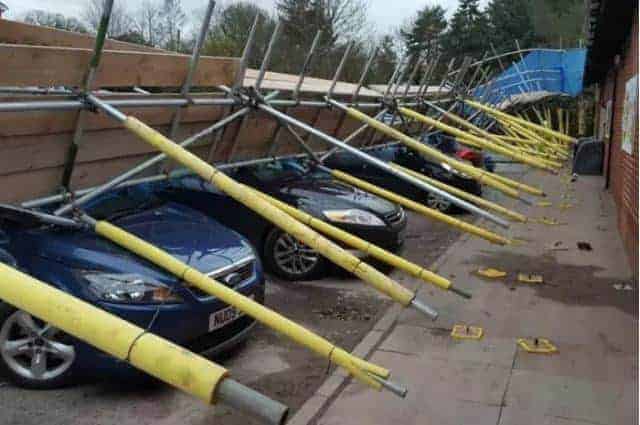 A Health and Safety Executive (HSE) investigation found Mr Kinsley failed to properly design or erect the scaffold in a safe and appropriate manner and as a result put members of the public and workers at risk.

Mark Kinsley of Little Lane, Pemberton, Wigan pleaded guilty to breaching Section 3 (1) of the Health and Safety at Work Act 1974. He was fined £1400 and sentenced to 16 weeks in custody, suspended for 12 months. He was ordered to pay costs of £1648.

Speaking after the hearing HSE inspector Katherine Blunt said: “This was a very serious incident and it is fortunate nobody was injured as a result of it.

“The case highlights the importance of following industry guidance and in order to design and erect scaffolding in a safe manner, which does not raise risk to members of the public and workers using the scaffold.”

HSE update guidance on driving and riding for work