Interlink Scaffolding (ISL) has been working on a major contract worth £5 million involving the worlds biggest waste energy plant currently under construction.

The Atlantic Project Company were looking for a scaffolding contractor to complete the works on the boiler-furnace, and all the associated tasks surrounding the biomass project, at the MGT site on Teesside.

North East based ISL had already been appointed in 2018 to work on both the internal and external of the 16 silos storing the biomass. ISL said they used a complex design utilising the Layher Allround system scaffold to offer a working platform to the inside of the silos. With the scaffolding material being purchased directly from Layher for the project.

The firm worked alongside both PHB and Technicas Redundas from Spain, on this phase of the job. 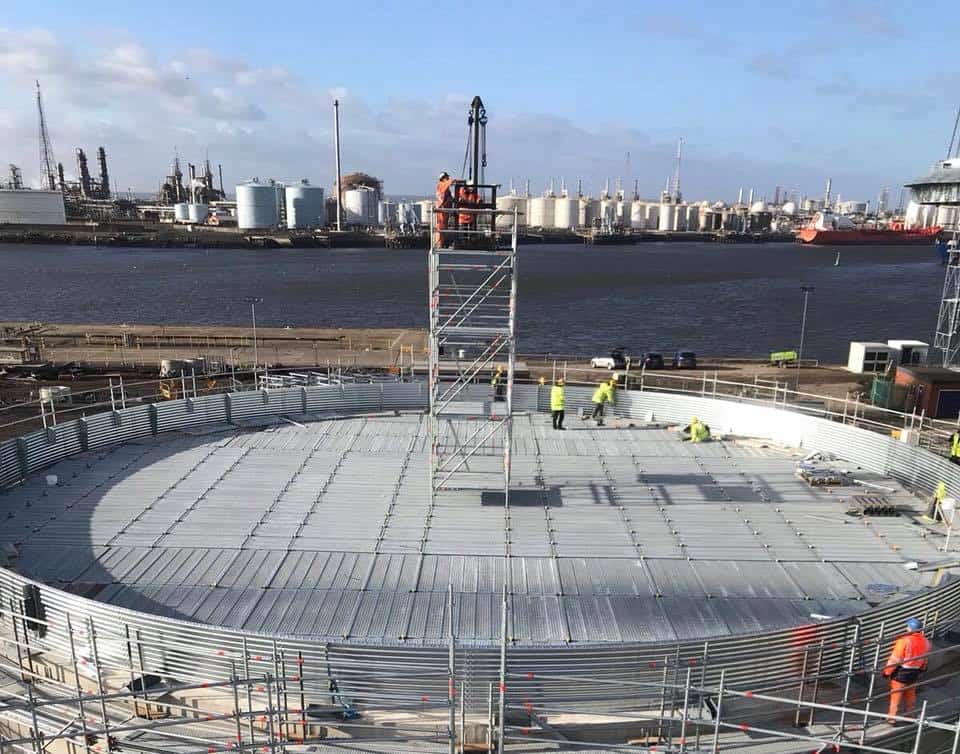 Later, a meeting was arranged with main contractors to discuss the possibility of ISL pricing works for the rest of the scheme. In fact, ScaffMag understands, 10 companies were asked to tender for the package as the Tyne and Wear scaffolders found themselves up against some big names within the industry. With five then being withdrawn, ISL then found themselves in a due diligence meeting to select the final two.

ISL Managing Director Darren Maratty, who is also Vice Chairman of the NASC Northern and North Wales Region told us: “A few people were a little sceptical of a predominantly ‘street work company’ tackling this type of project. We showed some of our past engineering and offshore projects alongside our recent Project of the year success. We also had a slight advantage over our competitors given our knowledge of the local workforce, and also our strong presence in the north-east. In the end, this probably contributed to ISL eventually winning the contract back in October 2019.

“We have shown in the last few months that we can achieve the deadlines and programs tasked to our management and scaffolding teams. These together are a mix of long term ISL employees from within the north-east area and a mix of new employees mainly from the Tees side area. This Takes our total work workforce to 236 employees.

“The increase in workload should also work in nicely, with our planned new purposely built £1.2m office and training complex, currently in for planning permission. With building work expected to start this summer. – Completion date to be arranged.”

In terms of the project, ISL has said 1,800 tonnes of scaffolding materials have been used to date. Wrapping scaffold around the main furnace proved complex, With the furnace hanging from the 57m level and scaffold needed at most of the joints where the pipework meets the boiler, alongside other areas where pipe joints were located. It was nothing however, the Birtley based set up couldn’t handle.

They have been pursuing the heavy industrial and engineering sectors for the past few years winning some impressive contracts along the way. But this is the largest to date with an approx. value figure of £5 million.

Darren added: “I personally think this will take us to the next level with offshore and now heavy industry in our back catalogue. It’s also another feather in our cap. This will increase ISL’s turnover by 50 percent taking us too well over £10m turnover this year. We will be looking to capitalise on this and probably double our turnover in 2021.

“This contract win has also shown we as Interlink Scaffolding can compete at the highest level and we will now be actively pursuing the bigger projects within the engineering sector in the UK and Worldwide.”