One of the men behind what has the potential to be one of the most revolutionary inventions in scaffolding is clear on the major problems facing the sector right now.

They are three problems that directly informed the research and development behind LIFTBOT. “Safety, labour shortages, and rising costs,” says Artem Kuchukov, co-founder of Kewazo.

After completing an MA in Construction Robotics from the Technical University of Munich, Kuchokov continued to explore the possibilities of automation for another two years before officially founding Kewazo GmbH in 2018 alongside business partner Ekaterina Grib.

Skip to today, and the company has unveiled the fruits of that labour – a system that can makes the transportation of materials on-site, and into situ, safer and more efficient. Think steel girders sent to the 39th floor of a new London skyscraper, via robot, and you’re in the right ballpark.

“Since the early stage of our development, we’ve always been talking to the scaffolding industry. All of them lead to the same result — that there are three main challenges: safety, labour shortages, and rising costs.” Kuchokov explains when we ask how the concept came about.

But the development of LIFTBOT, which benefited from €3.8million of venture capital investment and €500,000 in state support, didn’t come without difficulties.

“As with any startup, the biggest challenges for us were high uncertainty and limited resources,” he said. “Uncertainty in our case means you are doing something that nobody has done before, and so you need to be ready for questions that nobody has clear answers for.

“Of course, people might think that there are transportation solutions already available on the market. But we found out that their adoption rate is very low in the scaffolding industry, that is why it was clear to us that we have to rethink how material handling is done in scaffolding today.” 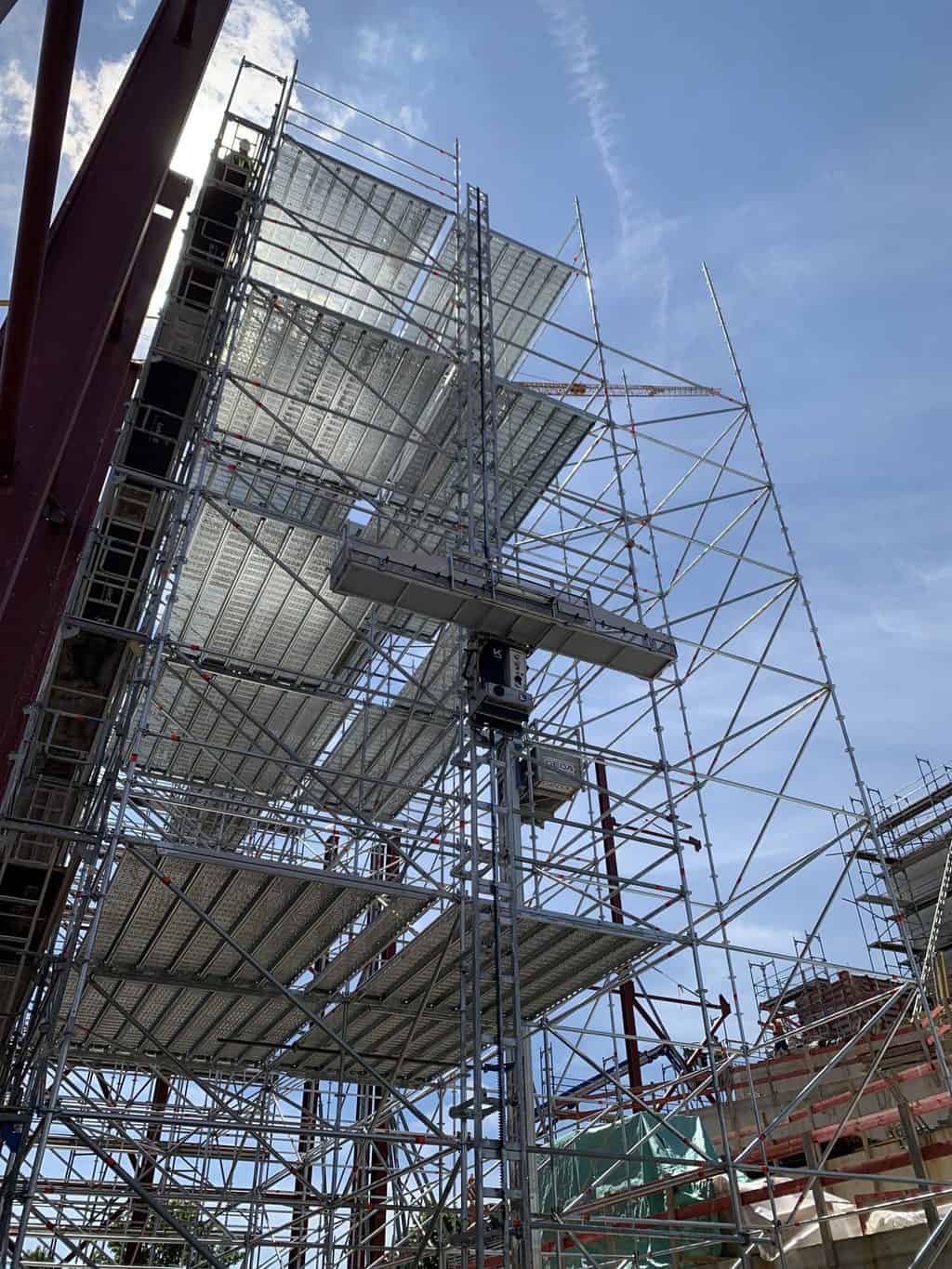 Mr Kuchukov went on to reveal the small team and relatively tight budget ensured the core idea was honed down to concentrate on the most significant benefits to users.

“We had to make clear decisions about features, and what we had to focus on. After countless hours spent with scaffolders, we identified three main priorities – installation flexibility, operational speed, and automated control,” he said. 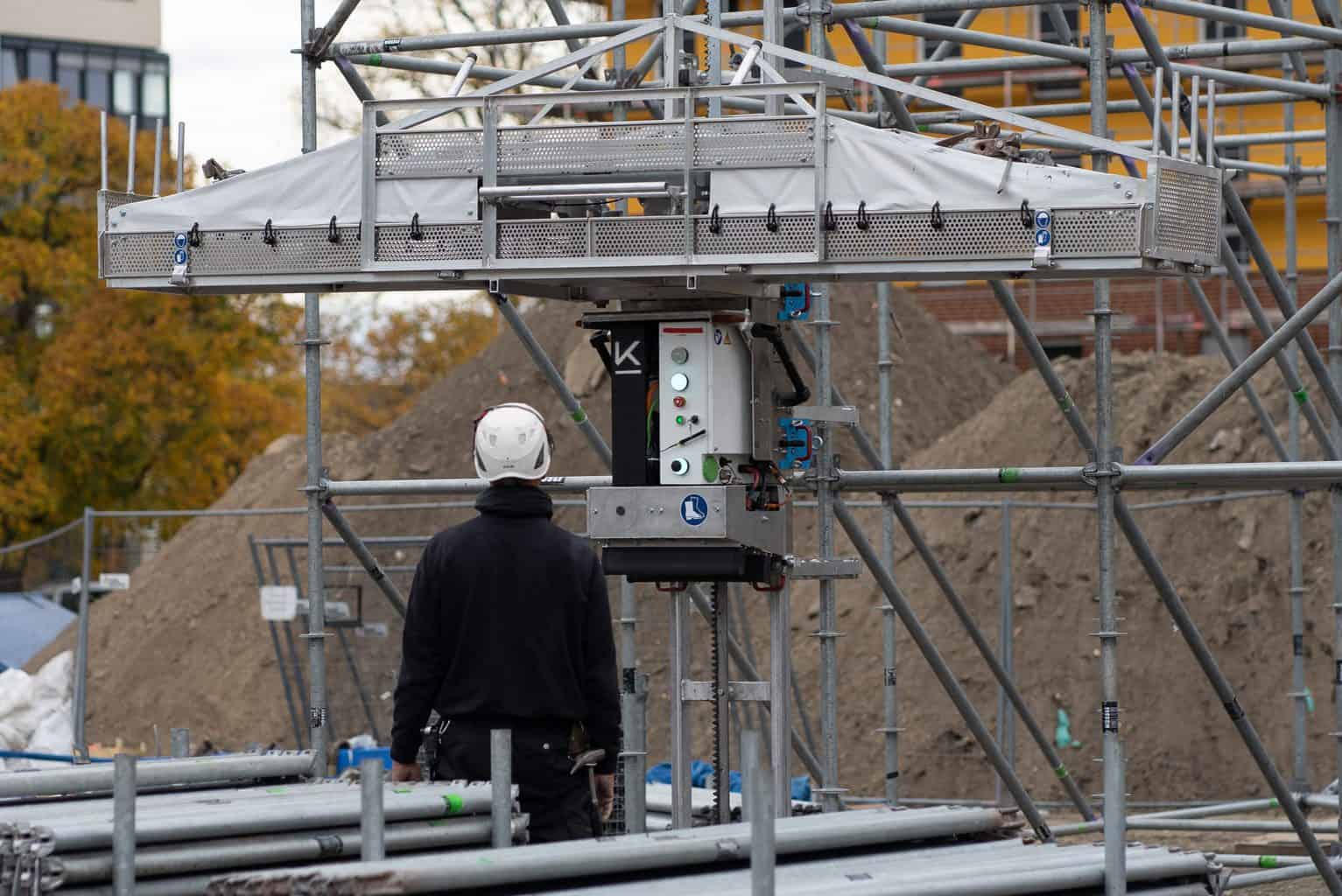 Put simply, then, the system is a cost-effective investment that can free up staff for other responsibilities — whether that’s on the same project or another undertaking. And with an official CE-certificate from TÜV Süd, one of the leading bodies in regulating powered access equipment, the safety aspect is already proven.

“We should be realistic about what can be done with robots. Construction sites are a very unstructured environment that requires human creativity,” Kuchokov replies when we ask about concerns relating to increased use of automation, and its impact on the jobs market.

“Think of this: in car manufacturing, for example, you can have welding robots working 24/7, sometimes even without lighting. The main reason for this is that everything is structured and predefined, you can secure the exact positioning of all elements. Now think of construction sites.

“Every construction site is unique, there is a lot of mess and things are not clean. Because of this, it’s simply not possible to have robots fully overtaking jobs in such a complex environment. At least in any cost-efficient manner. Despite all the progress in the areas of robotics and artificial intelligence, most probably, the situation will stay like this for at least the next few decades.

“The second point is the problem of labour shortage. Most of the companies around Europe struggle to find good scaffolders. This leads to missed opportunities and slower company growth. And as we’ve already seen in examples of other industries, automation can address this.”

While in many ways the system is a product of designers looking to other sectors for ideas on how to improve construction, the system’s functions are highly transferrable.

This means Kewazo GmbH hopes to see widespread adoption and uptake by firms in any sector that could benefit from automated transportation of materials, tools and more. 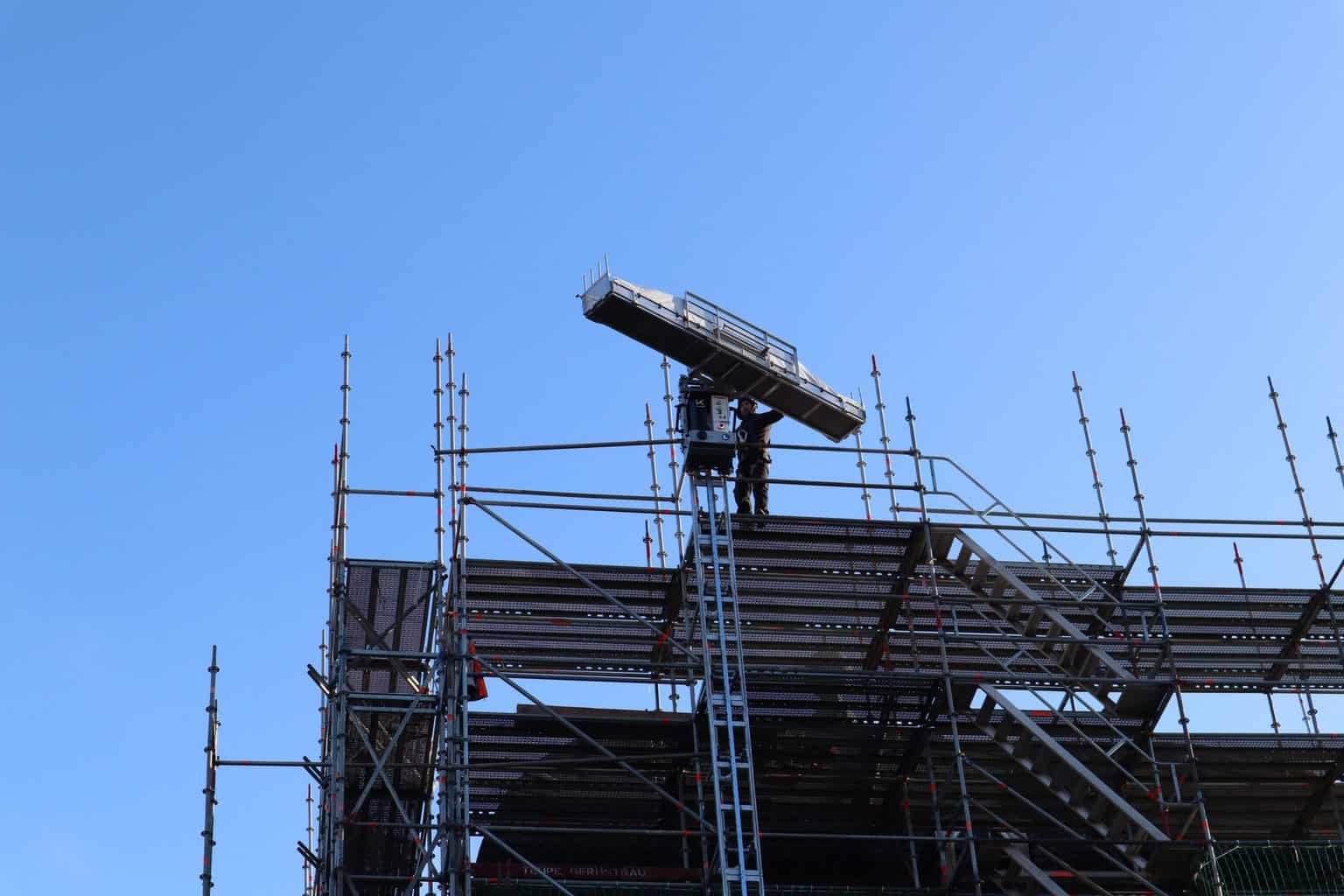 Some have already been using LIFTBOT with impressive results. As Kuchokov explains, since July 2019 the system’s impact has been studied across 30 different projects with startling impact. Not least companies benefiting from man-hour savings of up to 44%, whether that’s relating to scaffolding assembly, the ongoing transportation of building materials, or another delivery function.

“Maintenance of gas, oil and energy plants, and shipbuilding yards… Tests and pilots on real sites have shown that with LIFTBOT a three-man scaffolding crew can assemble almost any type of scaffolding faster than larger teams relying on manual transport,” Kuchokov says of the different environments that are proven to gain from Kewazo’s innovation.

“It’s important to note here, though, that saving man-hours doesn’t mean people losing their jobs. According to the feedback of some of our customers in Germany, for example, today the amount of available projects is around three times higher than what they can cover with their usual resources.

“This means that if there would be a possibility to free up a certain amount of people from being involved in certain jobs, this would allow companies to cover more jobs with the same resources.”

With the next decade or so set to be instrumental in determining the nature of the following century, companies must adapt and evolve to ensure they can thrive in a world that needs to become more efficient for a multitude of reasons.

That process is destined to involve changes in how people are employed, and what they are tasked with as part of that employment as a result of robotics and automation. With that in mind, it seems LIFTBOT is very much an invention for our times.

This article was first published in the ScaffMag Magazine Issue 12