Scaffolders across the UK are voicing their anger over the recent announcement of the CISRS CPD course with a petition to protest against the mandatory training.

Early last month CISRS announced that from 1 June 2017 it will introduce a two day Continuing Professional Development (CPD) course, which will become a mandatory requirement prior to Scaffolder or Advanced Scaffolder card renewal. 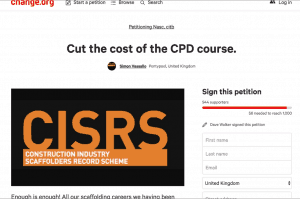 A petition has been set up at change.org by angry scaffolders to protest and cut the cost of the CPD that has been rumored to cost around £500. Within 48 hrs the petition has already received nearly 1,000 signatures in protest from scaffolders across the country.

Social media has played a key role in the protest, with over 3,000 scaffolders jumping on board to join Facebook communities to vent their anger of yet another impending expense.

However, no official costings for the 2 day course have yet been announced by CISRS, this will take place later in the year.

In a recent press release from CISRS, Scheme Manager Dave Mosley said: “We are aware that good employers strive to keep their workforce up to speed with changes within the industry, but this is not always the case. With a transient workforce and no formal programme for achieving this we cannot be sure exactly what information has been passed onto whom.

“The basic principle of CPD and/or refresher training is a good one. However, we are all too aware that this comes at a cost not only for the training itself, but also loss of production etc. As such we are looking to ensure that the course provides the most gain for the least pain and offers the scaffolder and their employer some real value added training,”

In a statement to ScaffMag from Simon Vassallo who set up the petition said:

“Enough is enough! All our scaffolding careers we have been paying for courses just to get work, everything from our scaffolding courses,safety passports, cscs touch screen tests, asbestos awareness training, the list goes on. Of course we do it, we all need the money and we all need to work”.

“This time NASC and CISRS have introduced a CPD course in which every scaffolder from June 1st 2017 will have to attend, it’s a 2 day course setting out new rules & regulations. This we can all agree is a good idea. EXCEPT, this means that’s the price of the course, plus losing 2 days wages could come into the region of £500”.

“For any man this is a lot of money, for the smaller firms it could be crippling, as those scaffolders who do not attend this 2 day course their cards will be void. Even though this course was 10 years in the making, there are still questions to be answered”.

“Overall we think it’s a good idea, but the cost is far from great.
This petition is set up on behalf of the working man who has had enough of these money making schemes, we wish the powers that be to stop this course coming in on June 1st 2017. Surely there’s a better, cheaper solution”.