Slate roof repairs on the 800-year-old St Patrick’s Cathedral in Dublin have called for a scaffold and weather protection system that takes full account of the historic importance of the building.

Ireland’s oldest church, St Patrick’s Cathedral dates back to 1220, its currently undergoing the replacement of 19th-century roof slates and is benefitting from the combined scaffolding expertise of Ainscaff Scaffolding – working for main contractor Clancy Construction – and the performance of Layher Ltd.’s Allround scaffolding and lightweight roof systems.

After a year in the planning, the installation above the nave features scaffolds either side of the cathedral to support a series of multiple-beam clusters from which further scaffolding then rises to the temporary roof.  Simon Ainscough, Director at Ainscaff, highlights the particular issues that have had to be addressed at the site –

“As so often with buildings of this type, the key factors that we have to accommodate are restrictions on tying-in to the fabric and both the movement and positioning of equipment through often tight spaces and alongside very valuable and irreplaceable structures and artefacts, and the Layher equipment provides key gains in each case,” he says.  By way of example, he points out that the celebrated organ alone is valued at some £2 million.

“Key benefits of the Layher system include optimised handling due to its lightweight construction and the fact that it requires markedly fewer components than, for example, a tube and fitting alternative,” he says.  He adds that because Layher Allround features a built-in rosette connection system, the risks of clamps, for example, falling or being left at site is minimised. 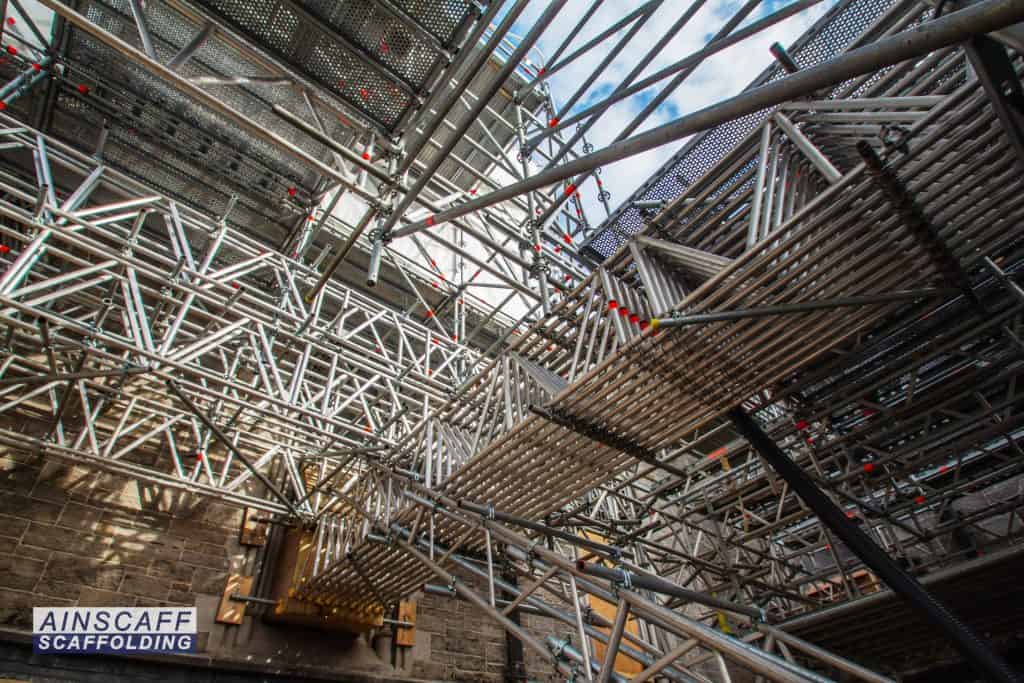 At the heart of the installation Layher’s, Ainscaff’s and Clancy’s design teams have developed a highly innovative scaffold and beam support structure to address the fact that tying-in was not possible.

“We created clusters, each of 11 Layher 750 beams, which were clamped to the walls before extending some eight metres externally through 14 windows along both sides of the building,” continues Simon Ainscough.  “These were then fixed to the external support scaffolds to provide a base from which further structural elements rise to support the temporary roof.”

The design effectively bridges – and, therefore, avoids loading onto – lower roof areas which run alongside the nave while also helping to ensure an important door access area remains open.  At the same time, the external support scaffold, which extends down to ground level, provides the optimum structure for the installation of a material loading bay and access stair system.

“The temporary roof itself features our Keder XL lightweight design which not only minimises loads and optimises handling, but can also be built to reach fully over the apex of the building without further support,” says Sean Pike, Layher Ireland’s Managing Director.  He points out that a total roof span of some 18 metres is achieved. 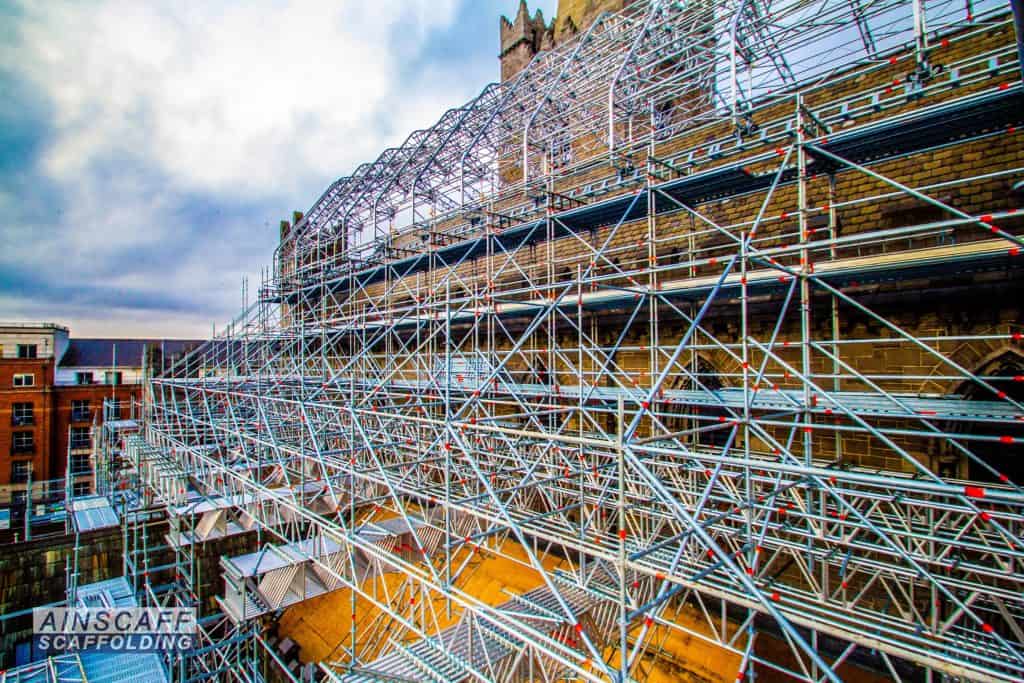 The bay-by-bay construction of the Layher temporary roof structure has meant that the limitations of only having one crane on site were sufficient for the installation.  “We could only lift from one end of the cathedral so we built rails onto the top of the support scaffold upon which Layher’s mobile roof system wheels were then located,” continues Simon Ainscough.  “As each bay was craned into position and sheeted, it was then rolled along and fixed to create space for the following frame.” The roof sheets were then pulled into position through the integrated roof beam top chord Keder tracks – the whole scaffold and roof installation being completed in just four months by 14 scaffolders including, significantly, five apprentices. 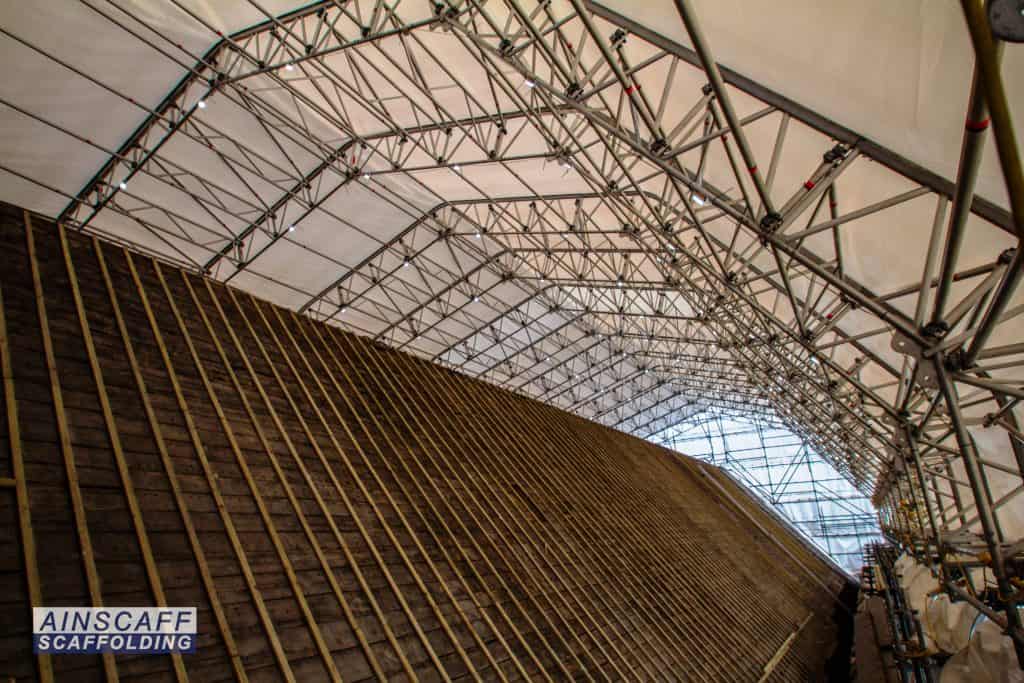 With fireproof steel decking throughout and, importantly, cross-bracing only required on the top lift as part of the means of securing the roof structure to the scaffold – which allows clear walkways for the movement of both men and materials – the Layher scaffold system brings clear gains to such an important and iconic structure.  The simplification of handling even helped the unloading of materials at site which had to be undertaken during the night to avoid traffic restrictions in the city centre location.

“This is a major project in every sense – not just because of its importance and specific structural characteristics, but also the amount of scaffolding and roof system material that has been used,” concludes Simon Ainscough.  He points out that some 4.5 km of ledgers, 1.8 km of beams and 3.4 km of standards have all been deployed for what is only the first phase of the roof refurbishment programme. Now that the new roof over the nave is complete, using slate from the same quarry that supplied the cathedral 150 years ago, attention has moved onto phase two – repairs to the transept roof – with the final phase three to follow.

“It is a high-quality installation which demonstrates the suitability of our equipment together with Ainscaff’s and Clancy’s skills in the field of conservation,” concludes Sean Pike.  “The structure provides safe, clear access and also creates the ideal, naturally-lit working environment for the roofing trades, yet impacts as little as possible on the continuing function of St Patrick’s Cathedral below.”

This article was originally published in Issue 9 of the ScaffMag magazine, read the digital version here.

Quality and innovation drives our sector